Ireland’s First DoubleTree by Hilton to Open in February

Hilton Worldwide will introduce the upscale DoubleTree by Hilton brand to Ireland with the launching of a new hotel in Dublin, one of Europe’s most popular tourist destinations. 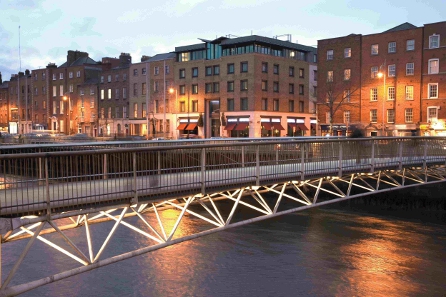 Hilton Worldwide will introduce the upscale DoubleTree by Hilton brand to Ireland with the launching of a new hotel in Dublin, one of Europe’s most effervescent tourist destinations. The group has signed a franchise agreement with Martinez Hotels & Resorts to reopen the renowned Morrison Hotel as The Morrison Dublin, a DoubleTree by Hilton Hotel. Following an extensive $9.3 million renovation, the 138-room property is expected to welcome its first guests by early February.

“We are delighted to be working with Hilton Worldwide to bring the DoubleTree by Hilton brand to Irish shores for the first time,” said Stephen Mulligan, UK & Ireland director, Martinez Hotels & Resorts. “There were many aspects of The Morrison’s identity we wanted to maintain when making the decision to convert to a branded hotel. DoubleTree by Hilton hugely impressed us with its track record of converting established properties to its globally recognized brand, while ensuring a real sense of individual flavor in every location.”

Ideally located on the banks of the River Liffey in the heart of Dublin’s city center, the hotel offers guests easy access to a number of tourist attractions such as the Aviva Stadium and O2 Arena, the Bord Gais Energy Theatre and the popular Guinness Storehouse. Amenities include two restaurants and a bar, a 24-hour business zone and a split-level fitness center. At 4,400 square feet, the hotel’s event space has the capacity of hosting up to 240 delegates.

“DoubleTree by Hilton is one of the fastest growing upscale hotel brands in Europe, and we are confident it will be a hit here in Ireland,” said Patrick Fitzgibbon, senior vice president, development, Europe & Africa, Hilton Worldwide. “We’ve been eager to secure the right opportunity and believe we’ve found it in The Morrison. This deal also is indicative of a renewed buoyancy in the Irish hospitality market, visible both in the strong performance of our other Hilton brands and the confidence of owners and developers to invest.”

Since opening its first European property in 2008, the DoubleTree by Hilton brand comprises almost 60 hotels across the region.  In the Republic of Ireland, Hilton Worldwide operates four other properties, all located in the capital city of Dublin. These properties include three Hilton Hotels & Resorts properties as well as an upscale Conrad Dublin hotel.