Port-adjacent markets are enjoying especially strong growth, according to the latest CommercialEdge report. 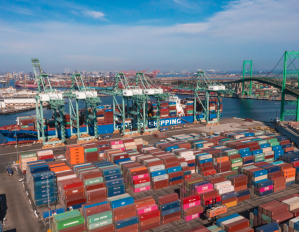 National in-place rents for industrial space averaged $6.88 per square foot in September, up 580 basis points year-over-year. Average in-place rents increased most in markets adjacent to ports, where developable land is scarce. Southern California markets—with the ports of Los Angeles and Long Beach nearby—had some of the highest increases of in-place rents over the past 12 months, with the Inland Empire (9.6 percent), Los Angeles (9.1 percent) and Orange County (7.1 percent) leading the way in this aspect.

On the East Coast, the New Jersey market—near the Port of New York and New Jersey—has seen rents grow 7.6 percent, according to CommercialEdge. On the other side of the spectrum, growth of in-place rents was slowest in Memphis and Houston (2.0 percent), Tampa (2.2 percent) and Chicago (2.4 percent). Nationwide, industrial market vacancy clocked in at 4.1 percent in September, unchanged from the previous month. The tightest vacancies were recorded in the Inland Empire (1.1 percent), Nashville (1.6 percent), as well as Central Valley and Columbus, both with a 1.9 percent vacancy.

No relief despite growing supply pipeline