The executive orders create what the president called a “unified national response” to climate change. Here’s what that means for commercial real estate. 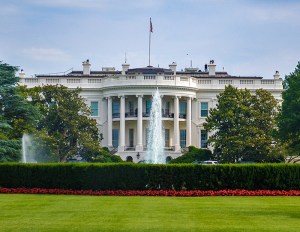 The White House. Image by David Everett Strickler via Unsplash.com

The climate-focused executive orders signed on Wednesday by President Biden were not his first. Last week, on Inauguration Day, he returned the U.S. to the Paris Agreement and ordered a review of all of former President Donald Trump’s climate regulation rollback measures.

But the broad series of measures contained within the new executive orders represent the action-oriented initiatives that environmental groups and sustainability-minded commercial real estate professionals say they have been waiting for, and they bring top-down leadership to the problem of property-based emissions.

Most of the actions are contained in a document entitled Executive Order on Tackling the Climate Crisis at Home and Abroad. The order aligns the federal government’s massive footprint—procurement and real estate, public lands and waters, and financial programs—”to support robust climate action,” thereby “creating a clear and stable demand” that will increase private investment as well as transparency and data.

The order also aims to “catalyze” sustainable infrastructure and energy-related projects that will create jobs in construction, manufacturing, engineering and skilled trades to help restart the economy, particularly in areas hard hit by the movement away from fossil fuels.

And it calls for environmental justice and equity, noting that economically disadvantaged communities have been disproportionally impacted by pollution, and it calls for 40 percent of relevant federal investments to flow to those communities.

Elizabeth Beardsley, senior policy counsel for the U.S. Green Building Council, said that the new federal commitment to leverage the breadth of its infrastructure to fight climate change is important for the environment and commercial real estate, and argues that it’s a strategy with proven results.

“When LEED was first started, the federal government was one of the early adopters and by illustrating leadership and using LEED for Federal goals, that helped it spread to the private sector,” Beardsley told CPE. “That was kind of the intent here in this executive order that—looking for opportunities to advance resilience and climate mitigation and equity in the full federal footprint and, then, the purchasing by the Federal government— not only helps the Federal footprint, but it has a spillover effect.”

USGBC also applauds the “whole-of-government approach.” The executive order creates the White House Office of Domestic Climate Policy and a Climate Policy Officer (Gina McCarthy) within the Executive Office of the president. It also establishes the National Climate Task Force, which will comprise the leaders of 21 federal agencies and departments. It also makes “climate considerations” an integral part of foreign policy and national security.

Biden’s initiatives will generate a lot of opportunity for real estate companies, particularly for those owners and operators who have been focusing on sustainability and improved resilience at their own facilities, according to Beardsley, who said that firms engaging with the Federal government will benefit from its investments in thermal and energy storage, emissions-free vehicle charging and other technologies.

“Those that do business with federal agencies, whether that is leases or development projects, are going to be looking at how their proposals and their projects can support these overarching goals of resilience, reduced carbon footprint and health,” she said.

While the infrastructure projects were expected as part of Biden’s Build Back Better Recovery Plan, leaders of the environmental and real estate communities said that those projects would serve to raise environmental standards and advance research and development for combating climate change.

“We have an unprecedented opportunity to invest in a combination of stimulus, policies, training and job creation that can help people get back on their feet with economic recovery, while also mitigating the 39 percent of carbon emissions associated with the buildings sector,” said New Buildings Institute CEO Ralph DiNola.

“Today’s actions by President Biden are essential to putting us on the path of decarbonizing our homes and commercial buildings. As an industry, we are ready to respond and are excited about the opportunities to build back better.”

Under Biden’s executive order, the U.S. will also: