While the financial and commercial real estate markets have positive expectations for growth, economists are skeptical.

Buoyed by promises of business-friendly tax cuts and less regulation, the financial markets have largely bought into expectations of higher economic growth, as evidenced by the equity market soaring to all-time highs.

The commercial real estate market generally has subscribed to the accelerated growth forecasts as well, though enthusiasm is tempered because the market is at the tail end of a long run of price appreciation: Since bottoming in January 2010, the Moody’s/Real Capital Analytics all-property index has risen 104 percent. 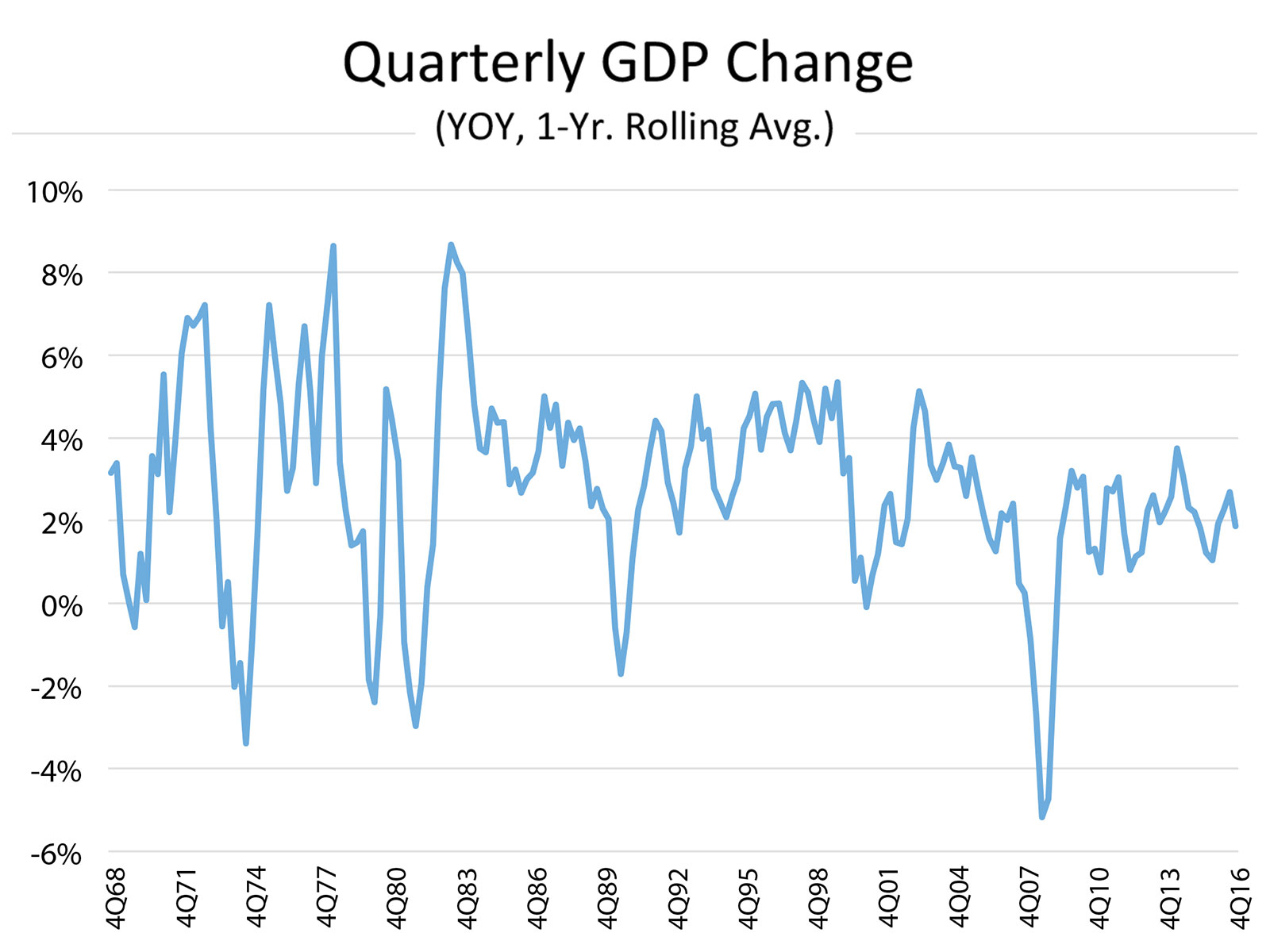 However, among mainstream economists, high growth expectations are unrealistic, at least according to the consensus view at the National Association of Business Economics’ Economic Policy Conference, held last week in Washington, D.C.

Some of the economists addressing the forum scorned the lack of modeling behind the new administration’s forecasts. For example, Jason Furman, a senior fellow at the Peterson Institute for International Economics and chairman of the Council of Economic Advisors under President Obama, wryly noted that President Trump has directed White House staff to assume 4 percent GDP growth in budget projections and to model the results backwards.

Joseph Stiglitz, a Columbia University professor and Nobel Laureate, called it “disturbing” that the administration’s senior team lacked economists. “We may not know everything for certain, but we know some things,” he said.

To be sure, there is a political divide over which economic policies work best, but the tempered expectations were apparent among right-leaning economists, as well. Glenn Hubbard, dean at Columbia Business School and chairman of the Council of Economic Advisors under former President George W. Bush, said the economy could grow in the high-2 percent range under the right circumstances. Meanwhile, Keith Hall, director of the Congressional Budget Office (CBO) and another former Bush-administration official, forecasts growth to average 2.1 percent over the next two years (2.3 percent in 2017 and 1.9 percent in 2018).

Long-term secular trends that have boosted labor force increases—such as the rise of women’s participation in the 1970s and 1980s—also are not present. Plus, a significant portion of the CBO’s projected growth in the U.S. labor pool comes from immigration, which runs at odds with the administration policies of securing the U.S. border and reducing the inflow of immigrants. 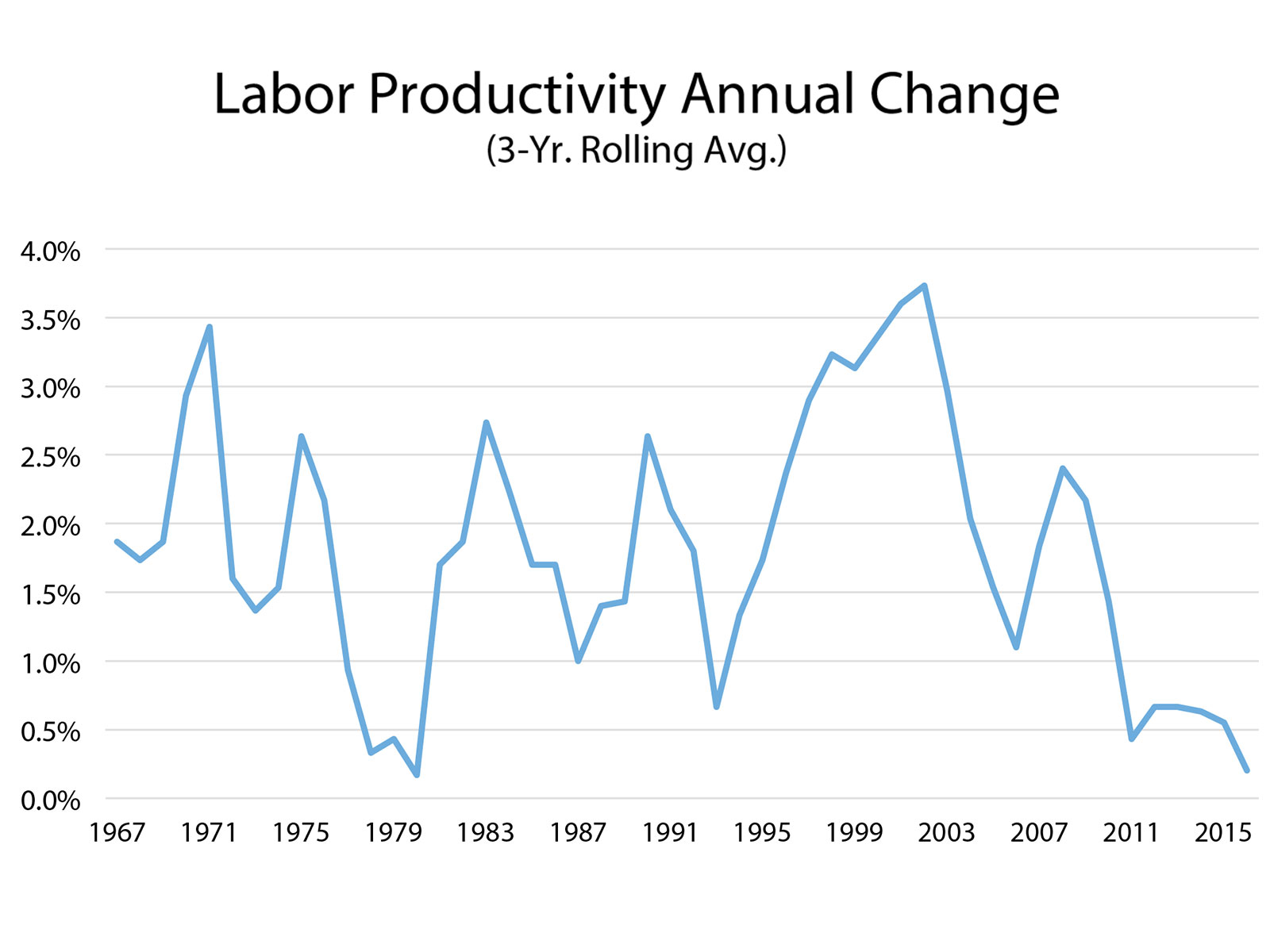 The second component (productivity) is likewise difficult to model. For one thing, it is notoriously hard to calculate the reasons for changes in productivity, which measures output per hour worked. Productivity increased strongly in the post-World War II period and again in the late 1990s, as businesses increased their use of technology. But productivity growth has been relatively flat in recent years, averaging 0.5 percent since 2011.

John Fernald, a senior research adviser at the Federal Reserve Bank of San Francisco, discussed possible reasons for the recent weak productivity gains. After raising and rejecting several theories—including the effects of the Great Recession and over-regulation—Fernald concluded that modest increases are a return to normal after the technology-fueled increases between 1995 and 2005. If that’s the case, there is no reason to expect a dramatic boost in productivity that will propel GDP significantly higher. “There’s no easy cure for low growth,” he said.

Optimists contend that the administration’s tax and regulatory policies will unleash higher productivity and generate more economic activity, but specifics are hard to come by, and many economists remain skeptical. “I’m not sure that setting expectations of 3 to 4 percent growth is advancing the discussion,” said Douglas Elmendorf, dean at the Harvard Kennedy School of Government and former director of the CBO.

Furman broke down the excess growth that could be achieved through individual components of the administration’s plans, including immigration reform, deficit reduction, changes in the border tax, favorably renegotiating the Trans-Pacific Partnership (TPP) trade deal and infrastructure spending. The model calculated pessimistic, baseline and optimistic scenarios for labor participation and productivity.

Under the analysis, the baseline for GDP growth was 1.8 percent in 2017, with the optimistic scenario projecting 3.1 percent growth and a pessimistic scenario of 1.4 percent. The largest potential growth in Furman’s model came from immigration reform and tax reform, while changes to the TPP and infrastructure spending would create small gains even under the best circumstances. “The possibilities for growth are less than the optimists would have you believe,” Furman said.

Forecasting the economy’s path is difficult for a variety of reasons, and chief among them is policy uncertainty. There is likely to be a large amount of difficulty forging consensus among the administration, the House and Senate, not to mention the looming threat of the filibuster by the Democratic minority in the Senate. Furman noted that by the end of February, every president in modern times has produced long-term budget estimates and passed some major legislation. But Trump’s team has yet to produce a budget, and most policy action has taken place via executive orders.

Douglas Holtz-Eakin, president of the conservative American Action Forum think tank, observed that during the campaign, President Trump focused on building a border wall and infrastructure, while House Republicans want to focus on other policy items, such as tax reform and repealing the Affordable Care Act. “It’s like junior high being run by the students,” he said. The House passed a health-care reform plan last week that has been panned across a broad ideological spectrum, and it faces an uncertain future in the Senate.

Holtz-Eakin said that the uncertainty and infighting make it difficult to solve critical problems, such as simplifying the tax code and reducing unsustainable budget deficits. “Uncertainty is greater than it’s ever been,” he said. “I get up every morning and my greatest hopes and worst fears have the same chance” of being realized.

Though economists broadly see increased trade between countries as a positive driver of growth, the trade deficit—at $502 billion in 2016—is one of the administration’s most ardent passions. The intensity of that belief was displayed by Peter Navarro, head of the president’s National Trade Council, who described the deficit in militaristic terms. In prepared remarks, he referred to foreign countries’ “conquest by purchase” and said that foreign governments are “intent on hegemony” over the U.S., which is losing a war “not by shots being fired but by cash registers.” If the trade deficit persists, he said “in the long run we’ll all likely be owned by foreigners.”

Navarro called the TPP “a bad deal” that would be “the death knell for the auto industry and the auto parts industry.” To this way of thinking, foreign countries undercut American manufacturing, which has a devastating impact on workers. He decried the “out-of-touch elitists who assume the poor would rather have cheap products than a paycheck.”

Navarro, who has created waves by calling out not only China but Germany for currency manipulation, said the goal is not so much to raise tariffs to discourage trade but to get other countries to lower their tariffs to create a more free and fair global trade environment.

Although most economists support trade, there is agreement that increased trade generally benefits Americans, but has a negative effect on those who lose manufacturing jobs. Stiglitz said that economists have oversold the overall benefits of free trade pacts such as TPP, without acknowledging it leads to lower wages or unemployment for some unskilled workers in the U.S.

Despite some agreement about the negative effects of trade, Stiglitz recommended a different solution than what he dubbed “new protectionism,” which would make the U.S. a less attractive country in which to invest, break the rule of law and introduce uncertainty to the economy. Instead, he proscribed policies to improve worker bargaining rights, increase worker training and social insurance programs, and encourage domestic savings.

Tax reform, which suddenly is possible by having one party in control of all three branches of government, represents major uncertainty and opportunity for reform. A main component being discussed is a border adjustment tax, which would levy taxes on products based on the location where  a good is consumed rather than where it is produced. Supporters say the policy would be revenue-neutral and have little or no impact on trade. The idea is to support products being made in the U.S. and reduce incentive for companies to move operations abroad.

Critics express concern about how the policy would impact industries that rely on goods from overseas, such as retailers, and contend that it would serve to strengthen the dollar, which would make American goods less competitive. While sympathetic to the idea, Furman said that “we’re kidding ourselves if we don’t think the rest of the world will perceive this as a trade policy” and might take actions to retaliate because administration officials are selling it as a trade issue. “If handled well, it could be a good idea,” he said. “I worry that this will be handled less than well.”