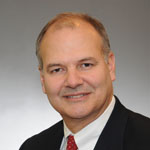 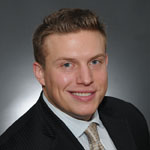 By Andrew Posil and Will Suarez

At the recent Massey Knakal CRE Summit, Larry Silverstein delivered a rousing keynote address outlining his company’s extensive development activities in Lower Manhattan. He enthusiastically described his firm’s remarkable World Trade Center buildings, as well as its residential, retail and hotel projects, which are reinventing Lower Manhattan. No longer is Lower Manhattan merely a place where people show up to work. Rather the area is quickly becoming a seven-day-a-week destination for all: businesspeople, leisure travelers and residents.

Given the tremendous momentum that Lower Manhattan’s real estate projects are gaining, Mr. Silverstein’s enthusiasm is well founded. With more than $30 billion in combined private and public investment in Lower Manhattan over the last 10 years, Silverstein Properties and many other notable New York developers have been compelled to spend much of their time, energy and resources there. And the amenities provided by this influx of development activity are likely to attract an increasing number of future visitors. Lower Manhattan’s vibrant new atmosphere, improved access and upgraded attractions are producing a burgeoning hotel market poised for further growth and prosperity.

Lower Manhattan—and specifically the Financial District, or FiDi, which spans the southernmost portion of Manhattan below Chambers Street—currently offers 19 hotels providing more than 4,200 rooms per night for visitors. Hotel options range from limited-service selections such as the Holiday Inn Express Wall Street and the Best Western Seaport to full-service hotels like the Millennium Hilton Hotel and the Andaz Wall Street. The market’s performance across all product types has been strong. According to Lesser Weiss Hospitality Advisors, the average daily rate (ADR) for FiDi is $260, with an overall occupancy rate of 83 percent producing revenue per available room (RevPAR) of $215.80. These strong performance metrics and the impending delivery of so many new market drivers have developers scrambling to meet the increasing demand.

At present, there are 16 hotels in Lower Manhattan’s development pipeline totaling approximately 3,274 rooms, or another 78 percent of inventory for the market over the next 36 months. While that seems like a daunting number on its face, the emerging supply must be viewed in the context of the fundamental change occurring in the very nature of FiDi. For years, FiDi catered primarily to business travelers, and as a result was only a five-night-per-week hotel market, with decreased occupancy and daily rates on Friday and Saturday nights. However, with more than 11.5 million visitors in 2012, that trend is shifting. Lower Manhattan is transforming toward a strong seven-night-per-week market, attracting both business and leisure travelers.

There are already popular attractions for tourists in FiDi, including the iconic “Charging Bull,” Battery Park, the Brooklyn Bridge and City Hall. Additionally there are numerous museums, such as The National Museum of the American Indian, the Museum of Jewish Heritage – A Living Memorial to the Holocaust and the Museum of American Finance. However, the opening of the 9/11 Memorial Museum on May 21, 2014, is a major step toward solidifying FiDi as a world-renowned tourist destination. Already, more than 10 million people have visited the 9/11 Memorial since it opened in 2011, and the new 9/11 Memorial Museum is expected to dramatically increase the number of visitors to the site. This is evidenced by the high demand for tickets, already sold out several months in advance.

While tourism in FiDi will certainly boost demand for room nights, growth of the office market will continue to buoy its core hotel driver: the business traveler. FiDi already offers 85 million square feet of office space and is home to approximately 310,000 jobs, yet the market is poised to add substantially more. At Silverstein’s World Trade Center project, 4.4 million square feet of state-of-the-art office space will be complete by 2015. 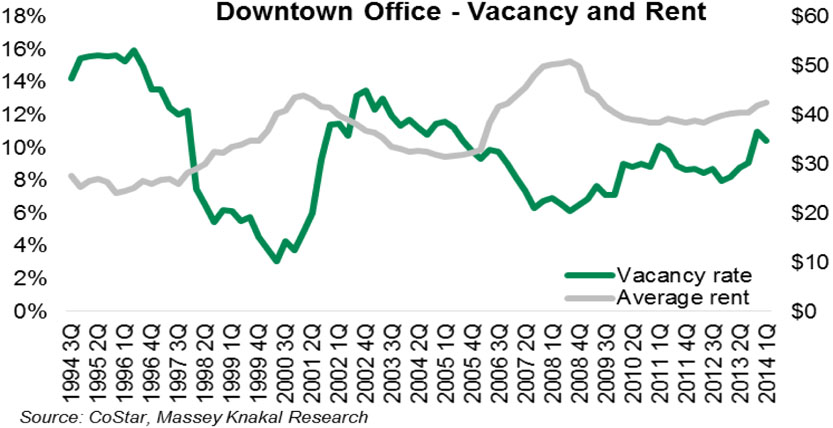 As evident in the graph at left, despite the delivery of new office product, both vacancy and rental rates are generally trending in positive directions. As the FiDi office market continues to grow, both organically and through relocation, the demand for FiDi hotel product will also benefit.

FiDi is also experiencing commensurate growth in retail and residential development. With so much business and leisure activity now occurring, retailers and residential developers alike have targeted the market. More than 1.5 million square feet of retail space is scheduled to deliver in FiDi over the next 24 months. Several of the most notable retail projects include Westfield World Trade Center, which will offer 350,000 square feet of lifestyle retail; Brookfield Place, which will feature a high-end mix of retail and dining, as well as hosting 100 free events per year; and the new South Street Seaport, totaling 365,000 square feet of mixed-use space with a 4,000-person amphitheater.

By 2016, FiDi will offer some of the most exciting retail and entertainment options of any neighborhood in New York. As a result, demand for high-quality residential product has also increased and will be met by 13 residential projects providing 2,700 units by 2017, a 4 percent increase in housing stock.

As with most major New York City development trends, mass transit is playing a critical role in the growth of FiDi. The MTA is expanding its already outstanding service to the area with the addition of the Fulton Center. This ultra-modern station, which cost approximately $1.4 billion, will serve an estimated 300,000 commuters per day and will make accessing FiDi convenient for business and leisure travelers alike.

FiDi’s development momentum is undeniable across all sectors. The hotel space is no exception. With so many new reasons to visit FiDi, this increasingly popular and attractive hotel market is getting even stronger.