Hines, McCaffery and Ivanhoé Cambridge are behind the sustainable, tech-centric, transit-oriented office project. 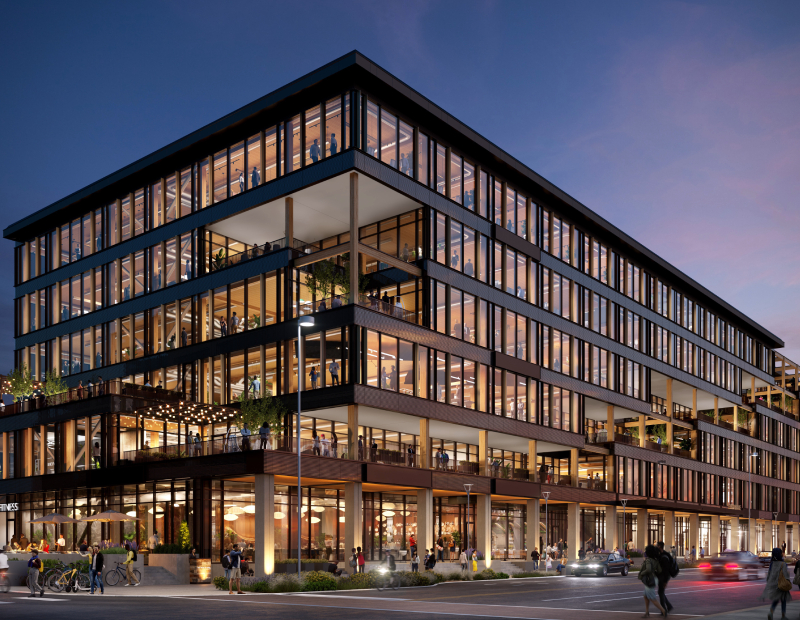 Hines, McCaffery and Ivanhoé Cambridge recently broke ground on T3 RiNo, a speculative creative office project centered on timber, transit and technology in Denver’s River North Arts District, commonly known as RiNo. Designed to promote sustainability as well as work/life balance, the 240,000-square-foot building will sprout up at 3500 Blake St., just one mile from downtown Denver and adjacent to a commuter rail station.

The six-story building will showcase an industrial look designed by Pickard Chilton Architects and DLR Group. Created with sustainably sourced wood, the property will feature loft-style office space with 12-foot ceilings as well as 16,000 square feet of retail space and a host of extras not often found in Denver’s existing 1980s-vintage office properties.

“As the war for talent in Denver persists, there is continued demand for Class A, new construction office space that can offer tenants the premier amenities sought out by today’s employees,” Durkee said. “Building amenities such as complimentary fitness facilities, private tenant terraces, bike storage and shared and collaborative common area spaces are becoming a necessity, rather than a nice-to-have, for companies fighting to attract and retain top-tier talent.”

JLL has been tapped to oversee office leasing at T3 RiNo, while McCaffery will handle tenanting of the retail space. The project is on schedule to deliver in spring 2022.

Denver’s office sector is benefiting from the metro’s strong employment market. Job growth increased 2 percent or more annually for 84 consecutive months through 2018 and went on the upswing again in late 2019, reaching 2.4 percent in November, according to a fourth quarter 2019 report by JLL. Office absorption totaled nearly 1.4 million square feet in 2019. The powerhouse developers behind T3 RiNo are confident about developing a spec project in the current environment.

“We have new firms announcing relocation in and expansion to Denver on an almost daily basis,” Glen Sibley, managing director with McCaffery, told CPE. “You just can’t pick up the newspaper without seeing an announcement from new (to Denver) and expanding firms, and many of those need space on an immediate basis and need space for expansion in the future.”

Among the new businesses Denver welcomed in 2019 is San Francisco-based background-check tech firm Checkr, which opened its second headquarters in a 92,000-square-foot space in the LoDo neighborhood. And Amazon announced plans to expand its Denver Tech Hub with the leasing of 98,000 square feet at Invesco’s 1515 Wynkoop, a downtown office building originally developed by Hines.

Companies seeking to relocate or expand in Denver remain attracted to the city’s lower costs and, perhaps more notably, its highly skilled workforce. “Denver has become a city highly sought after by young people starting their careers and moving here for the lifestyle and work/life balance that Denver has to offer. And employers want to attract those workers who wish to work in neighborhoods like RiNo where they can live and play in close proximity to their workplace,” Sibley said. “The days of office space decisions being totally driven by the location preferences of the occupant of the corner office are gone.”