Since 1988, just 100 companies have been responsible for nearly 71 percent of the entire world’s industrial greenhouse gas emissions.

Planet Earth is looking at a worrisome future, largely due to reckless human activity. While some are unaware of the risks of global warming or simply don’t believe they exist, others are actively looking for ways to slow down if not stop the downward path to avoid the catastrophic trend caused by carbon emissions. Measures include recycling, green energy sources and replacing traditional cars with hybrid or electric cars. Planes are also close to implementing technology to use electric power.

The Climate Accountability Institute (CAI) and the Carbon Disclosure Project (CDP) joined forces to publish the Carbon Majors Report 2017, a document for investors looking to understand how much their fossil-fuel holdings are associated with carbon emissions. The results are both unsurprising and alarming, as just 100 state and commercial producers are responsible for 70.6 percent of all greenhouse gases (GHGs) emitted from 1988 to 2015. That equates to 923 billion tonnes of carbon dioxide equivalent (CO2e), a term that encompasses carbon dioxide, methane, nitrous oxide and refrigerant gases. 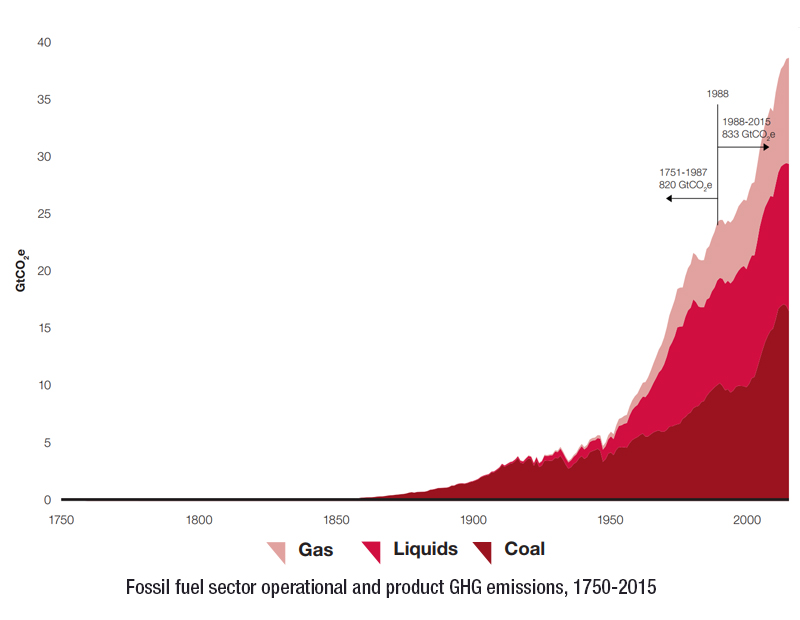 The report focuses on fossil fuel producers and is intended to be the first in a series of publications that will highlight the role companies and their investors could play in combatting climate change. The study found that more than half of global industrial emissions since 1988 (the year the Intergovernmental Panel on Climate Change was established) can be traced to just 25 corporate and state-owned entities. The scale of historical emissions associated with these fossil fuel producers is large enough to have contributed a considerable amount to overall climate change, according to the report.

Global temperatures on the rise

The fossil fuel industry has contributed as much GHG to the atmosphere in the 28 years since 1988 as it did in the first 237 years since the industrial revolution began, mostly due to the rapid increase in coal production. If fossil fuels continue to be extracted at the same pace over the next 28 years as they were between 1988 and 2015, global average temperatures would rise by 39.2 Fahrenheit (4 degrees Celsius) by the end of the century. This would lead to species extinction, large risks of regional and global food scarcity and could even further affect Earth’s climate system. 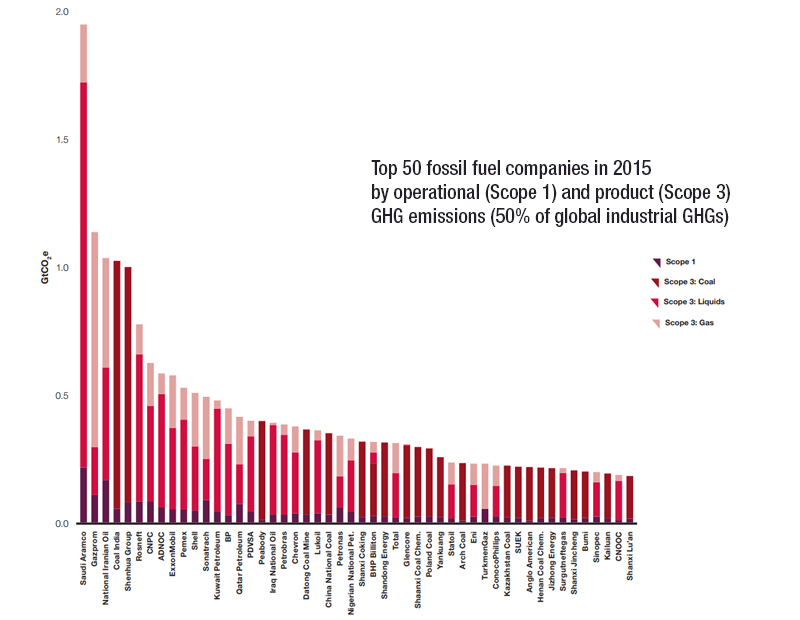 Large ventures into carbon-intensive “unconventional oils” have emerged. Companies like Suncor, ExxonMobil, Chevron, Shell and ConocoPhillips have invested in the extraction of oil sands, tight oil, heavy oils and other forms, which carry a larger environmental impact than conventional crude oil. Moreover, under the Trump administration, the United States seem to detain progress on the matter. The country has withdrawn from the Paris Climate Accord, and the Environmental Protection Agency (EPA) has reported a large share of climate change deniers. The fact that Dakota Access Pipeline received approval for the rapid expansion of shale oil production points to an even deeper issue.

Meanwhile, a growing number of non-fossil-fuel companies such as Apple, Google, Ikea, Adobe, Bank of America and eBay, have committed to using 100 percent renewable power under the RE100 initiative. Also, some of the largest companies seem to give the impression that they understand where this is leading. Thus, Shell initiated a renewables program, while Chevron and ExxonMobil are looking into carbon-capture technologies to pull CO2e from the atmosphere.

“This ground-breaking report pinpoints how a relatively small set of just 100 fossil fuel producers may hold the key to systemic change on carbon emissions. We are seeing critical shifts in policy, innovation and financial capital that put the tipping point for a low carbon transition in reach, and this historic data shows how important the role of the carbon majors, and the investors who own them, will be,” the report stated.

“In particular, the report shows that investors in fossil fuel companies own a great legacy of almost a third of all industrial GHG emissions, and carry influence over one fifth of the world’s industrial GHG emissions today. That puts a significant responsibility on those investors to engage with carbon majors and urge them to disclose climate risk in line with the FSB Task Force for Climate-related Financial Disclosure (TCFD) recommendations, and set ambitious emission reduction targets through the Science Based Targets initiative to ensure they are aligned with the goals of the Paris Agreement,” said Pedro Faria, technical director at CDP.