Going Off the Grid?

In a study from Accenture, utility executives weigh the future of the grid, distributed generation and other issues. 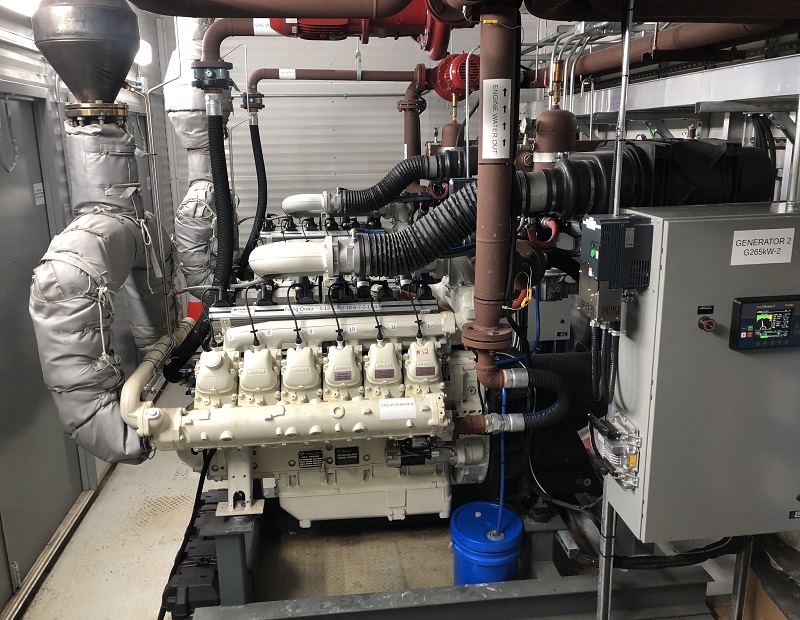 With distributed generation technologies (DG) like rooftop solar increasing faster than many utilities can expand grid capacity, nearly half of 150 global executives surveyed recently by Accenture say parts of their grid will reach maximum capacity in three years or less. Only 1 percent believes it will take longer than five years.

The study, conducted as part of Accenture’s Digitally Enabled Grid research program, found the proportion of both commercial and residential consumers with rooftop solar arrays in some markets like California could exceed 15 percent by 2036 – a trend that is expected to affect net electricity demand going forward.

One startling statistic from the survey of 150 utility executives in 25 countries found that 95 percent of them agreed the risk of consumers going off the grid and only using it as an occasional backup will increase significantly in the next two years. While some energy experts say the likelihood of a majority of commercial property owners and managers disconnecting from the electric grid entirely is unlikely, there are some that have already done so by using on-site power generation by private utilities and firms like OOM Energy of Oakville, Ontario.

It’s also no secret that DG presents a challenge to the distribution utilities. “Distribution businesses have had a tough time in recent years with weak demand, which is one reason why grid operators’ profits have been squeezed,” Stephanie Jamison, an Accenture managing director who leads its Transmission and Distribution business, said in a prepared statement. “The proliferation of DG changes electricity demand profiles, potentially diminishing total demand without necessarily reducing peak demand. Successful DG integration will require substantial investments in new connections and grid reinforcement to modernize the network and sustain the same level of reliability and safety and secure operations.” 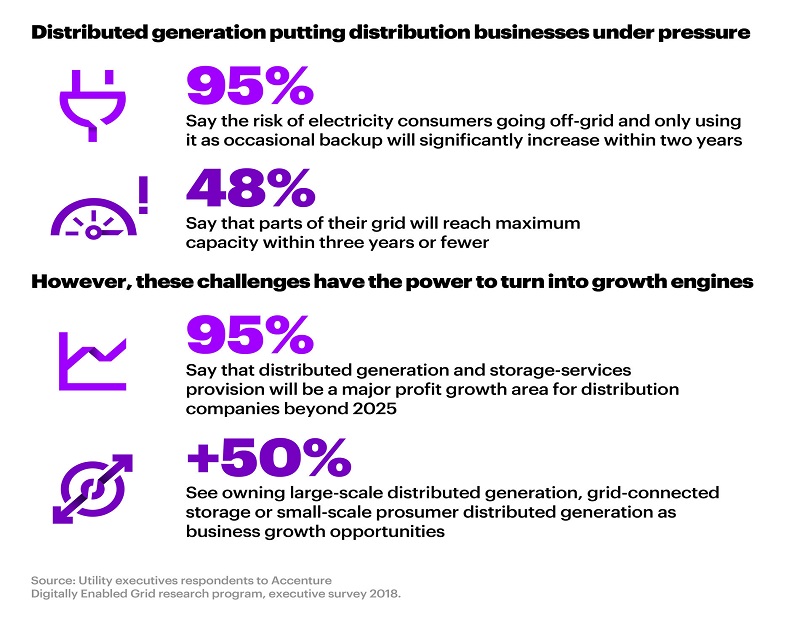 The Accenture report notes many are already looking at ways to generate substantial capital reinforcement savings, often by doing a better job of identifying local constraints on the distribution network. For example, a 10 percent improved accuracy in DG forecasts resulted in projected savings of 15 to 28 percent in New York, 14 to 18 percent in California, 14 to 15 percent in Australia and 11 to 12 percent in the United Kingdom and the Netherlands.

Asked to rank their top five choices for cost-saving opportunities, 59 percent of respondents in the Accenture survey chose distributed integration. In the top spot, 61 percent stated reducing supply chain costs through improved forecasting of materials and service requirements was their top choice.

The overwhelming majority – 95 percent – of the respondents do believe that DG and storage services will be a major profit growth area for distribution companies after 2025. More than half said they planned to own large-scale DG, grid-connected storage, small-scale prosumer DG and community storage in the future.

Accenture modeling notes that following a period of stagnation, electricity demand could grow by 31 percent between 2026 and 2036 due in part to the growing adoption of electric vehicles (EVs) and increased building heating electrification starting around 2025. The combined effects of EVs and heating electrification alone could push peak demand electricity consumption up by about 63 percent from by 2040.

“Mass adoption of electric vehicles and the electrification of building heating is poised to alter demand growth and load shape in the longer term,” Jamison stated. “This suggests high growth potential for utility distributors, but it will also put pressure on grid stability. The key will be to navigate this disruption by making the grid more resilient through greater use of smart technologies and utilizing all sources of flexibility including on the demand side, adopting a more customer-centric approach.”

Decarbonization of buildings is also likely to push up electricity demand in the future, with 96 percent of the utilities executives agreeing decarbonization efforts will substantially reduce residential and commercial natural gas demand by 2040.

Going Off the Grid

For companies looking to take their commercial buildings off the grid, some may go with a private utility like OOM Energy rather than a public utility. The Canadian company provides clients electricity through an Integrated Energy Platform™ (IEP), which comes in a portable “plug and play” box placed outside a facility and can be scaled up or down to meet energy needs and also add in new green technologies as they become available, Clydesdale said. The most common use right now is natural gas and cogeneration and some battery storage but Clydesdale said he expects to do more with hydrogen and commercial fuel cells in the future. Hydrogen use will become more important, he said, as electric cars (EVs) become more common and systems will be needed to handle the peak demands of charging.

Clients pay OOM Energy a fixed monthly long-term Energy Services Agreement and typically pay about 20 percent less than what they paid the public utility, he said. Because there are no wires or poles or connection to the public grid, there are no blackouts or brownouts due to weather conditions or other reasons. For one of OOM Energy’s clients, a hospitality company with hotels in North America and the Caribbean, that’s an important consideration.

“It’s a fully redundant system. We stay up under most conditions,” Clydesdale said.

In addition to hospitality, residential and the Stoneridge Ice Centre in Burlington, Ontario, OOM Energy’s clients include an automotive company, office buildings and oil and gas facilities and other industrial users.

Clydesdale said right now only about 1 percent of commercial properties are operating off the public grid. He expects in the future it could be as high as 30 percent.