KKR & Co. L.P. has acquired the top 10 office floors at 30 Hudson Yards and will be relocating its corporate offices to the flagship tower when the NYC development opens. 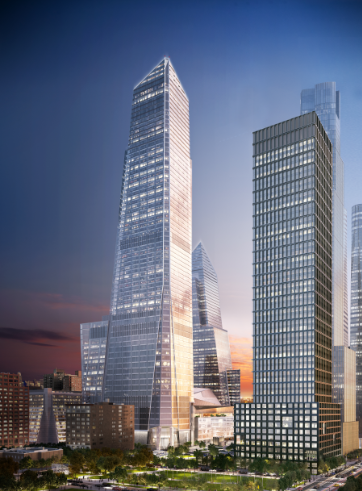 KKR & Co. L.P., has acquired the top 10 office floors at 30 Hudson Yards and will be relocating its corporate offices to the flagship office tower in 2020 when the New York City development opens.

The site is being developed by Related Companies and Oxford Properties Group and is expected to be complete in late 2019.

“This is a unique opportunity to partner with world-class developers to create a new office to house KKR’s New York team and host our clients,” Henry Kravis, KKR’s co-founder and co-CEO, said in a prepared statement. “This move will allow our teams to work together in a dynamic setting that promotes innovation and forward thinking. Related and Oxford are creating a tremendous amount of energy at Hudson Yards, and KKR is pleased to be a part of it.”

Additionally, there will be direct access to premier retail shops, restaurants and the city’s highest outdoor observation deck and top floor restaurant and event space.

“Having one of the most prominent and forward thinking global investment firms in the world invest in and relocate to Hudson Yards is a testament to the vision and success of the new neighborhood and commercial district emerging on Manhattan’s West Side,” Stephen M. Ross, Related Companies’s chairman, said in the release. “Hudson Yards has already attracted global leaders in media, fashion, beauty, tech, law and finance, and the current interest in our commercial office towers continues to far outpace our current availability.”

Previously, Time Warner Inc. acquired approximately 1.5 million square feet of space in the building, and KKR is the seventh corporate office tenant to announce plans to move to Hudson Yards.

Hudson Yards has been the talk of the town lately as numerous major leases have been signed and development plans are advancing. In June, Boies, Schiller & Flexner announced it will move its New York City offices to 55 Hudson Yards; Coach Inc. has purchased over 600,000 square feet of space in 10 Hudson Yards; and L’Oréal USA, German software engineering firm SAP and social media-first digital agency VaynerMedia announced their plans to locate at 10 Hudson Yards when the building opens in early 2016.

Related and Oxford were represented by Robert Alexander of CBRE and Stephen Winter of Related.