Florida has the strongest building codes in the U.S., with construction standards enacted to withstand wind speeds of up to 175 miles per hour or a Category 5 hurricane. 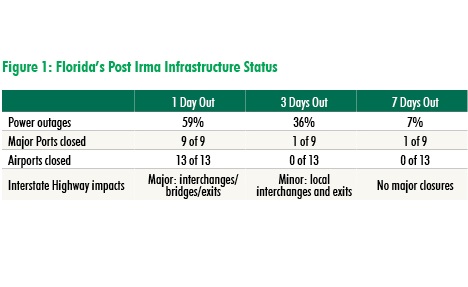 Hurricane Irma, the strongest Atlantic basin hurricane ever recorded outside the Gulf of Mexico and the Caribbean Sea, stretched 650 miles from east to west and affected at least nine U.S. states. The hurricane made its initial landfall in the Florida Keys on Sept. 10 as a Category 3 storm and later made a second landfall at Marco Island on Florida’s west coast, triggering 6.3 million people to evacuate, flooding major cities and leaving millions without power.

Single-family residences bore the brunt of the storm’s destruction, while the state’s office and industrial markets reported minimal damage, according to a comprehensive CBRE report. Both short- and long-term preparation significantly minimized Irma’s impact on commercial properties. Short-term readiness factors included evacuation plans, emergency fuel and power supply arrangements as well as contingency plans. Long-term preparation plans consisted of enhanced building codes and infrastructure readiness that contributed to the state’s ability to withstand and quickly assess the damage. Less than one week after the storm, almost 100 percent of the state’s mainland power grid and infrastructure were operational, minimizing business losses. 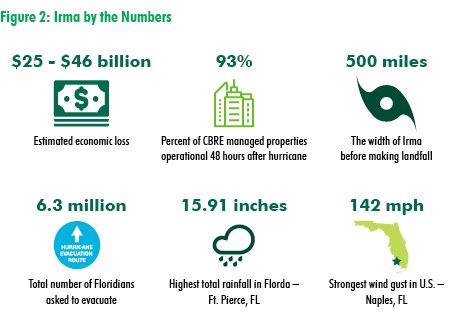 Irma by the numbers

Since Hurricane Andrew in 1992, the state invested extensively into upgrading its building codes to protect real estate assets from hurricanes. Florida now has the strongest building codes in the U.S., with construction standards enacted to withstand wind speeds of up to 175 miles per hour or a Category 5 hurricane.

Florida’s office sector was well-prepared and withstood Hurricane Irma with wind-resistant glass, sump and discharge pumps and strategic placement of vital building systems. South Florida has invested heavily in pump systems and building standards that enable easy and efficient flood drainage. According to many office landlords, the damage to their assets was minimal and mostly included fallen trees, landscaping issues and minor leakage through window seals and roofing from heavy rains and wind.

According to CBRE’s research, no near-term increases in short-term leases are expected as there were no major tenant displacements and only minor business disruptions due to extensive power outages. Irma hasn’t affected the capital markets front either, with sales moving forward with minor delays.

Most of Florida’s industrial assets sustained little to no damage. Per CBRE’s estimates, vacancy in the industrial market is expected to drop further in the short-term, due to post-storm demand from disaster relief agencies and building supply companies. The state’s supply chain was put to the test by the hurricane, as there are no refineries or pipelines providing Florida with direct access to petroleum products, relying on fuel deliveries form ports. Florida didn’t fail the test and all major ports were reopened within two days after the storm.

Increases in gas and food sales are expected to continue for the next two months of the active hurricane season and building-supply companies should see an uptick in sales, as repairs to residential structures commence. While most of the state’s retail properties didn’t incur significant damage, retailers in certain areas of Jacksonville and the Florida Keys were impacted on a greater level, as many shops and restaurants were flooded. Some were shut down only for a few days, while others have yet to re-open and remain shuttered or destroyed. Florida Governor Rick Scott has been providing additional support to this area in the hopes of having the Keys open for business by the end of October. 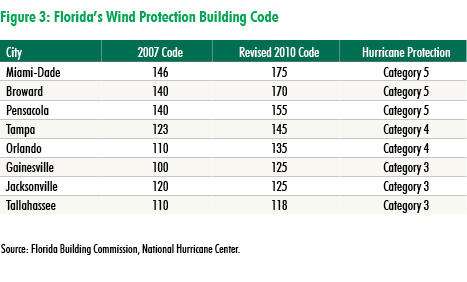 As of Sept. 19, a total of 452,205 Hurricane Irma claims were filed with estimated insured losses of $2.7 billion, and 392,967, or 86.9 percent of those claims were for residential properties, according to the Florida Office of Insurance Regulation. The bulk of the claims came from south, central and northeast Florida, with damages ranging from minor water intrusion to lost roofs and partial wall collapses. The extensive damage to the single-family segment will drive up multifamily and temporary housing demand. This will put further strain on an already short-staffed employment pool in the construction sector but may encourage additional in-migration to fill these necessary roles.

South Florida’s tourism-dependent economy is now exposed not only to the physical risk of property damage but the economic risk of a decline due to natural disasters. The Florida Keys had approximately 10,000 rooms before Hurricane Irma and the hotels have been closed to tourists since the storm. Officials hope to fully reopen the Keys by late October, in time for the busy fall and winter seasons. On a more positive note, most hotels in Jacksonville, St. Petersburg, Tampa, Ft. Myers, most of Miami, Miami Beach and the Orlando area have already reopened.

According to CBRE, an important long-term risk to the hotel industry is stigma related to traveling to disaster-ravaged areas, resulting in the decrease of demand for lodging. After hurricanes Andrew and Katrina, demand fell below previous levels for extended periods.