Brevan Howard will occupy two floors at 1345 Avenue of the Americas. 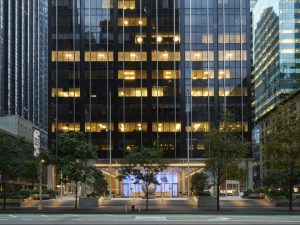 1345 Avenue of the Americas. Image courtesy of Fisher Brothers

Brevan Howard, a leading alternative management platform, has signed an 83,403-square-foot lease expansion agreement at 1345 Avenue of the Americas in New York City.

Fisher Brothers is the owner and manager of the 50-story, 2 million-square-foot office tower. Last year, the company completed a $120 million capital improvement project at the property.

Built in 1968, the tower spans 2.1 acres and comprises office space, as well as underground and first-floor retail space, with 44,021-square-foot floorplates. The renovation project included upgrades to the building exterior, touchless elevators, a tenant lounge, a wellness center and meeting spaces, as well as a large art installation.

Located at 1345 Ave. of The Americas in Manhattan, the property is less than half a mile from Central Park and Rockefeller Center. The property is also within walking distance of numerous dining and retail venues, as well as bus and subway stations.

Brevan Howard will expand the lease from a partial floor tenancy and will occupy the 19th and 20th floors of the property. Bernstein, BBVA, Centurion Investment Group, Virgo Business Centers and Global Infrastructure Partners are also among the property’s tenants.

Represented by the same internal and CBRE teams, Fisher Brothers secured another major tenant at 1345 Avenue of the Americas in February last year. Equitable Financial Life Insurance Co. signed a 15-year lease at the property, planning to occupy more than 130,000 square feet across multiple floors and relocate its headquarters to Midtown Manhattan starting next year.