The robotics and automation supplier's footprint will grow to nearly 2 million square feet. 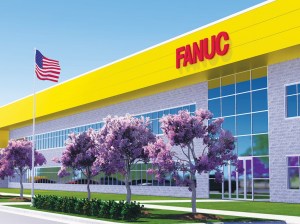 FANUC America, a leading supplier of computer numerical controls (CNCs), robotics and factory automation technologies, broke ground on a 655,000-square-foot facility that will expand the size of its Auburn Hills, Mich., footprint to nearly 2 million square feet. The ceremony included a FANUC CRX Cobot, which is built to work alongside people, that assisted in the groundbreaking.

The new facility in the Detroit suburb, to house manufacturing, engineering and R&D projects, will take shape on 67 acres of land that FANUC America acquired along with the former Thomas M. Cooley Law School campus. The new and existing structures will total 803,100 square feet at what will be called the West Campus.

The company, a subsidiary of Japan-based FANUC Corp., announced the $86 million investment in July and stated it was in response to the growing demand for automation solutions in the United States. General Development Co., which also built FANUC’s 461,000-square-foot North Campus, will be constructing the new facility. Completion is expected in spring 2024.

Located some 30 miles northwest of downtown Detroit at 2630 Featherstone Road, the development site is roughly 7 miles from Continental’s automotive headquarters for North America. In September, Continental, which manufactures parts for autonomous driving systems, completed a $110 million, 215,000-square-foot facility in New Braunfels, Texas, as part of its U.S. expansion.

Mike Cicco, president & CEO of FANUC America, said in a prepared statement that, since the company opened its North Campus three years ago, business has increased significantly and further expansion will enable the company to help more customers⁠—both large and small⁠—to achieve their production goals.

FANUC plans to move its Customer Training Academy to the former school once renovations are complete, making it the largest corporate automation training operation in the U.S. The redesigned facility will include more classrooms to provide better learner-to-instructor interactions, as well as increased lab space for hands-on training.

Cicco said a new Deloitte study found there will be at least 2 million unfilled manufacturing jobs within the next eight years, which is contributing to the rapid pace of automation. He said the new training academy will help companies upskill their employees and keep production running smoothly. It will also offer workers more career opportunities as they learn how to operate robotic and automation equipment.