Entitlement spending has so dramatically expanded that it is literally impossible to balance the federal budget without addressing promises made in the past.

A major problem today is that so-called entitlement spending has so dramatically expanded that it is literally impossible to balance the federal budget without addressing these promises made in the past by irresponsible politicians.

To put it bluntly, even if every dollar of federal spending were eliminated except for entitlements, the federal budget still would not be balanced. This problem grows daily as more Boomers retire and collect their entitlements, while an ever-expanded Medicaid program sees its outlays climb skyward. Annual Medicare and Social Security Disability expenditures already exceed their fictitious trust fund account balances, which are projected to be depleted by 2030.

Similarly, retiree benefits are projected to exceed their equally fictional trust fund balance by 2031 with depletion projected by 2035. While there are many sound policy proposals on reversing this unsustainable trajectory (including forestalled retirement age, tighter disability standards and means testing), none muster serious interest among politicians. 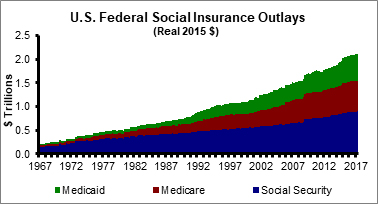 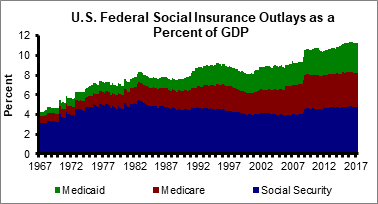 A good start is admitting that there is no such thing as entitlements, but rather, only anticipated transfer payments. The simple truth is that we have overpromised and need to rein in transfer payments. But this is easy for us to say, as we are not running for elected office.

On the revenue side, people often talk about reduced government revenue associated with tax reductions as if it hurts the economy. Apparently, they believe that this money disappears if the government does not take it from the citizenry.

The truth is that the money does not disappear. Instead, it is retained and put to use by the people who earned it through their hard work, and these citizens generally use it far more productively than does the government. This movement of resources from less productive government usage to more productive private use spurs economic growth. This is why France does not grow as rapidly as the U.S., as the French government spends 57 cents of every dollar of its GDP. This perspective of negative arbitrage of government spending is in stark contrast to Keynesian models, which assume (contrary to all evidence) that government usage is more productive than private usage.

While it may well be true that government revenues decline as taxes are reduced, it hardly means current revenue levels are optimal. It is a responsible government’s job to cut spending when revenues decline. Of course, this requires a functional government that is capable of both prioritizing expenditures and making the necessary adjustments. It is noteworthy that the Congressional Budget Office’s model of the impacts of tax cuts on federal revenues is never close to correct, in large part because it is mandated to ignore the impacts of any positive arbitrage growth.

The non-partisan Tax Foundation has estimated that if tax reductions in line with the Trump outline were introduced, positive arbitrage growth would increase real GDP by 8.6 percent in the following decade. Arthur Laffer estimates that the resulting boost in economic activity would greatly assist state and local government coffers by about $1 trillion over the decade, which would go a long way toward alleviating their budget woes.

Dr. Peter Linneman is a Principal and Founder of Linneman Associates and Professor Emeritus at the Wharton School of Business, University of Pennsylvania. www.linnemanassociates.com