The World Bank revised its growth forecast for the world's economy to just 2.5 percent in 2012. The FDIC proposed new rules that would include stress tests for banks holding between $10 billion and $50 billion. And U.S. consumer-loan defaults rose in December. 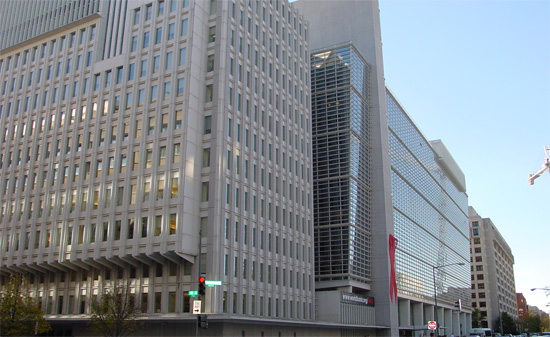 The World Bank revised its prediction for the growth of the global economy in 2012 on Tuesday, and it wasn’t a change toward the upside. In fact, the transnational organization said that it believes that the world economy will grow only 2.5 percent this year. Last summer, the World Bank had predicted a growth rate of 3.8 percent for the entire world.

The re-jiggering of the forecast was mainly, but not entirely, a function of the crisis in Europe. Rather than the previous anemic 1.8 percent estimate for European growth, the World Bank is now predicting that the euro zone will go retrograde and contract by 0.3 percent during 2012. The United States was revised downward as well, from 2.9 percent to 2.2 percent, but at least that’s some growth, rather than anti-growth.

Slower growth is already visible in weakening global trade and commodity prices, the organization also reported. Worldwide exports of goods and services expanded an estimated 6.6 percent in 2011 — down from 12.4 percent in 2010 — and are projected to rise by only 4.7 percent in 2012. Meanwhile, global prices of energy, metals, minerals and agricultural products are down 10 percent, 25 percent and 19 percent respectively since peaks in early 2011. That’s emblematic of a slowing world economy, but it does have a silver lining, namely that declining commodity prices have contributed to an easing of headline inflation in most developing countries.

The Federal Insurance Deposit Corp. proposed new rules on Tuesday that would, among other things, force banks with assets north of $10 billion but less than $50 billion to do their own stress tests, once a year, and then report the results to the FDIC. Three months after that, the reports would be published for all to see. The agency had previously proposed similar rules, as directed by Frank-Dodd, for banks with more than $50 billion in assets.

Another set of new regulations (also required by Frank-Dodd) would also oblige banks with more than $50 billion in assets to submit contingency plans periodically that would describe their own dissolution, should it come to that (“living wills,” as they’re sometimes called). The idea is to allow orderly bank closures for banks whose panicky failure would give investors the heebie-jeebies. The rule would apply 37 banks currently regulated by the agency, representing about 61 percent of insured assets nationwide.

“The rule seeks to address a key lesson learned from the recent financial crisis, which is that resolution plans for large and complex insured depository institutions are essential for their orderly and least-costly resolution,” the FDIC noted in a statement.

Standard & Poor’s Indices and Experian reported on Tuesday that most loan types saw an increase in defaults during December. Bank-card default rates were the only kind to decline, from 4.91 percent in November to 4.6 percent during the month.

“First-mortgage default rates rose for the fourth consecutive month, as did the composite,” David M. Blitzer, managing director and chairman of the Index Committee for S&P Indices, said in a statement. “Since August, first mortgage default rates have risen from 1.92 percent to 2.19 percent. The recent weakness seen in home prices is reflected in these data. Bank-card default rates, on the other hand, were favorable, falling to 4.6 percent in December. This is more than a full percentage point below the 5.64 percent we saw as recently as July 2011.”

Wall Street managed to climb into positive territory on Tuesday, despite a late-session dip. The Dow Jones Industrial Average gained 60.01 points, or 0.48 percent, while the S&P 500 was up 0.36 percent and the Nasdaq gained 0.64 percent.