The supercommittee on Monday conceded that compromise on deficit reduction is impossible. The NAR reported that existing-home sales inched upward in October. And the Chicago Fed's activity index is still negative. 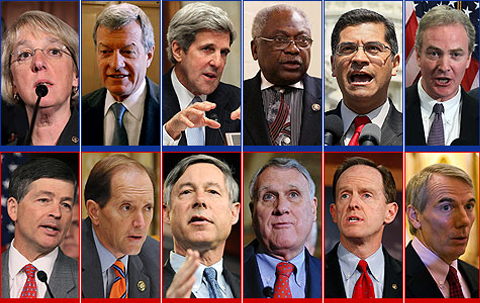 As expected, the efforts of the Congressional supercommittee, a.k.a. the Joint Select Committee on Deficit Reduction, ended with a whimper on Monday when both sides conceded that compromise was impossible. Both sides were also quick to blame the other, highlighting the wide gulf between the parties regarding a workable approach to deficit reduction. Whatever its other merits, the committee, composed of a dozen members representing both chambers and evenly divided by party, couldn’t built a bridge across that gulf. In short, failure.

Then again, the committee was an unusual experiment in the annals of Congress, and perhaps best characterized as an expedient to get a debt-ceiling deal done last summer to prevent a default by the United States. Now Congress, or some members at least, will likely turn its attention to tinkering with the automatic cuts to domestic and defense spending slated to start in little more than a year.

Regarding that contingency, President Obama says no: “I will veto any effort to get rid of those automatic spending cuts to domestic and defense spending,” he said in the White House briefing room on Monday. “There will be no easy off-ramps on this one. We need to keep the pressure up to compromise, not turn off the pressure.” Thus the stage is set for an epic election-year squabble over the issue.

Existing home sales inched upward in October according to the National Association of Realtors on Monday. Total existing-home sales, which for the NAR includes single-family, townhomes, condominiums and co-ops, rose 1.4 percent to an annualized rate of 4.97 million units in October from a downwardly revised 4.9 million units in September. Compared with the same month in 2010, when the market was still feeling the post-tax credit blues, sales this year were 13.5 percent higher.

Lawrence Yun, the organization’s chief economist, continues to assert — as he has for some months now — that factors besides lousy employment numbers and stagnant wages and overall buyer skittishness are to blame for continuingly sluggish home sales. “A higher rate of contract failures has held back a sales recovery,” Yun said in a statement. “Contract failures reported by NAR members jumped to 33 percent in October from 18 percent in September, and were only 8 percent a year ago, so we should be seeing stronger sales.”

According to NAR, contract failures include cancellations caused by a decline in mortgage applications, failures in loan underwriting from appraised values coming in below the negotiated price, or other problems including home inspections and employment losses. These problems are likely to continue to vex home sales for a while yet. On the other hand, the organization also noted on Monday that the number of homes on the market dropped 2.2 percent month-over-month in October to 3.33 million units, or an eight-month supply. As recently as the summer of 2008, there were 4.58 million homes on the market nationwide.

The Federal Reserve of Chicago said on Monday that its National Activity Index was –0.13 in October, up from –0.20 in September. Among the broad categories that make up the index, production and employment edged up, while consumption and housing were down. The index is a weighted average of 85 existing monthly indicators of national economic activity; a negative reading means the economy is growing below historic trend.

The Chicago Fed’s less-volatile three-month moving average, the ponderously named CFNAI-MA3, was a little less optimistic, dropping from –0.16 in September to –0.27 in October. “The economic slack reflected in the level of the CFNAI-MA3 suggest subdued inflationary pressure from economic activity over the coming year,” the Fed noted in its report.

Predictably enough, the failure of the supercommittee unnerved Wall Street on Monday, with the Dow Jones Industrial Average dropping 248.85 points, or 2.11 percent. The S&P 500 lost 1.86 percent and the Nasdaq declined 1.9