The area's beaches have long been a hospitality magnet, but the city core is lately emerging as a powerful contender. 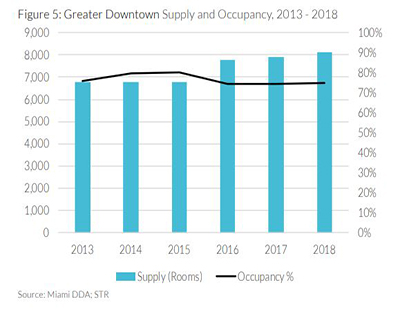 Downtown Miami has recorded a 37 percent increase in overnight stays over the past five years, according to a recent tourism report released by the Miami Downtown Development Authority. This is due to the region’s growing appeal as a leisure destination, growth of passenger volume at Miami International Airport and PortMiami, as well as the area’s enhanced business activity.

More than six million people visit downtown yearly, making it the second most visited area in Miami-Dade County, following the beaches. This equates to 40 percent of all visitors. In 2018, 57 percent of all visits were for leisure (up 44 percent since 2011), while 17 percent were for business.

Since 2013, domestic travel was up 14 percent, while international travel increased 9 percent. The average downtown occupancy rate ranges between 74 percent to 80 percent, with the region outperforming many other U.S. cities in terms of Average Daily Room Rates (up 12 percent), Revenue Per Available Room (up 11 percent) and total hotel revenues.

Over the past eight years, downtown Miami has doubled the number of hotel offerings. Revenues increased 36 percent in the meantime, from $331 million to $448 million. Since 2014, downtown Miami has landed seven new hotels, growing the total market from 6,785 to 8,121 keys. There are also nine more hotels in the pipeline, totaling 3,895 keys.

“We now see more and more leisure travelers staying in the urban core, and we’ve experienced an uptick in the number of business travelers looking to extend their stay to explore the city. This change has coincided with the growth of nearby neighborhoods like Miami’s Museum and Entertainment District, the Wynwood Arts District and the Design District, which are popular among visitors. We’ve reached a point where a visit to Miami Beach is one element of a trip to Miami, rather than the focal point of the entire stay,” he added. 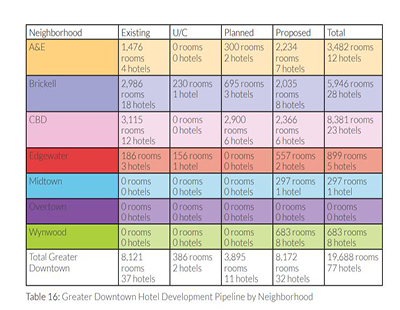 Miami has also been a hot spot for new development. Also in February, Aria Development Group, in partnership with Aqarat, begun construction on Yotelpad, a 327,356 square-foot, mixed-use project. In January, a Waldorf Astoria project secured a $33 million pre-development loan provided by BridgeInvest for a 98-story luxury condo and hotel property.

“This new report is indicative of a longer term growth pattern which has been moving in a constant, upward trajectory since the Great Recession,” Suzanne Amaducci, partner & real estate practice group leader for law firm Bilzin Sumberg in Miami, told Commercial Property Executive. “As Miami continues to boom as world-class city both in permanent population, along with growth on our cruise ships and flight traffic from tourists, it’s helping to support extremely unique types of hotel product here and in return Miami has truly become a 24/7, global destination.”

Charts and data courtesy of DDA