Developers Top Out $3.8B Manhattan Skyscraper

BlackRock and Facebook are slated to occupy the 58-story office tower in Hudson Yards. 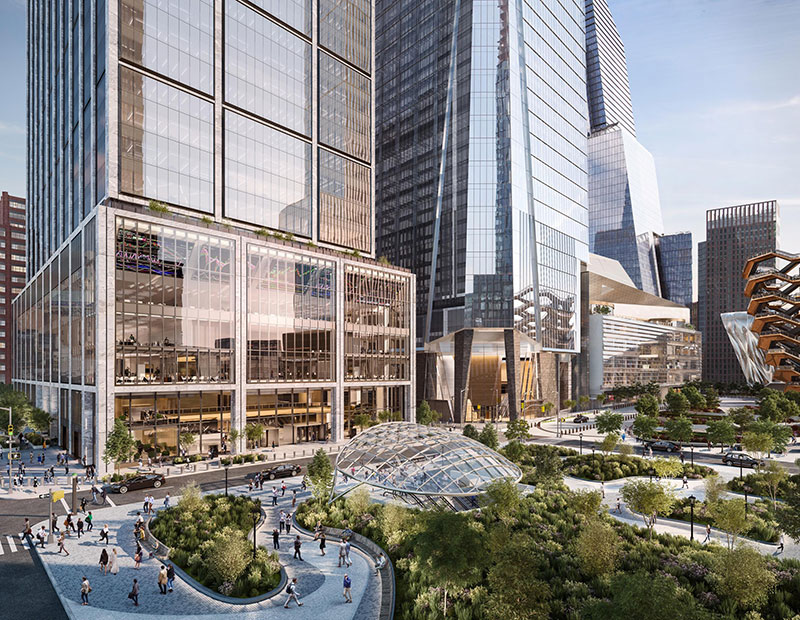 The developers behind New York City’s fourth-largest office tower have laid the final beam on the 58-story skyscraper in Manhattan’s Hudson Yards district, as the city’s office users eye an eventual return to the workplace.

Related Cos., Mitsui Fudosan America and Oxford Properties Group observed the topping out of 50 Hudson Yards with a ceremony on Feb. 12, crowning an effort that began when the partners closed on $3.8 billion in financing for the project in 2017. Slated to open in 2022, the 1,011-foot-tall tower will span 2.9 million gross square feet.

Occupying an entire block at the northwest corner of 33rd Street and 10th Avenue, the tower forms part of the Hudson Yards mega-project on the Far West Side. The property is already 75 percent leased to tenants including BlackRock, whose new global headquarters will occupy 970,000 square feet, and Facebook, which has claimed 1.2 million square feet.

The LEED Gold candidate designed by Foster + Partners will feature 94 elevators and large floor plates that can accommodate 500 or more employees per floor. Amenities will include dedicated ground-level lobbies, common sky lobbies, outdoor terraces and executive valet parking, as well as direct access to the No. 7 subway.

The construction milestone comes as most of the city’s office space continues to sit empty and many large employers, including Facebook, are embracing the work-from-home trend. Facebook CEO Mark Zuckerberg remarked last May that up to 50 percent of the firm’s employees could be working remotely within five to 10 years, and in August the social media giant extended its temporary work-from-home policy through July 2021. 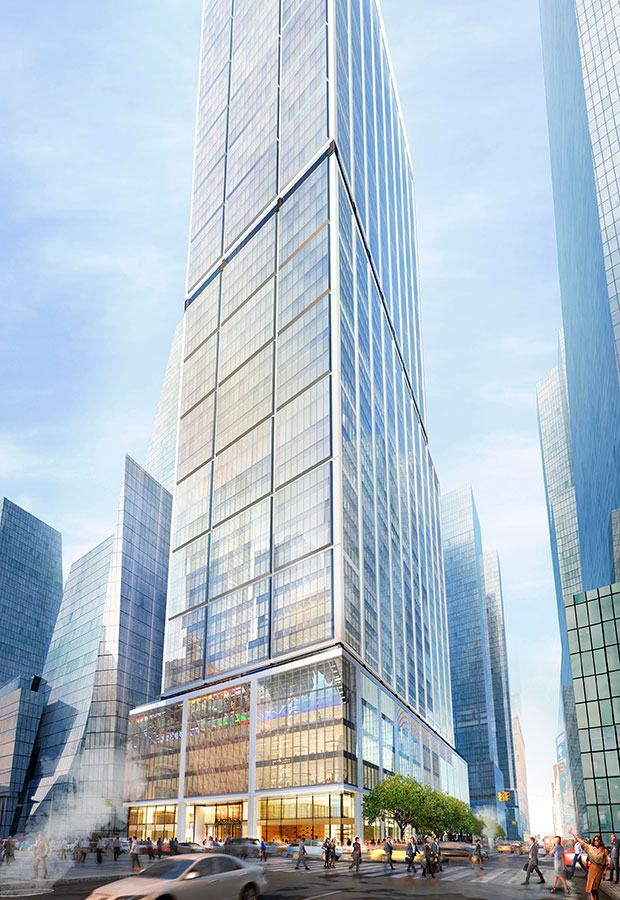 That hasn’t stopped Facebook from expanding its office footprint. The California-based company chalked up one of New York’s largest leases of the year when it agreed to take 730,000 square feet of office space at Vornado Realty Trust’s Farley Building in Midtown Manhattan last August. That blockbuster deal came after Facebook leased more than 1.5 million square feet of office space across three buildings at Hudson Yards, including 50 Hudson Yards, in late 2019.

BlackRock seems equally committed to retaining a physical office presence. The asset management behemoth, which is currently based in Midtown Manhattan at Park Avenue Plaza (55 E. 52nd St) and 40 E. 52nd St., reopened its office to a limited number of employees last July. The company extended its work-from-home policy through the first quarter of this year, but executives have privately notified staff that the office will remain the primary work location over the long term, according to a Bloomberg report last month.

A spokesperson confirmed to Bloomberg that BlackRock still plans to shift its New York City employees to 50 Hudson Yards in late 2022 or 2023. The move was first announced in 2016.

Eleven months after the U.S. rolled out federal social distancing guidelines in response to the COVID-19 outbreak, offices across major cities remain less than one-quarter occupied on average, according to access control data from Kastle Systems. The New York City metropolitan area’s office inventory was 13.3 percent occupied as of Feb. 3.

Spotify, which is headquartered at Silverstein Properties’ 4 World Trade Center in Lower Manhattan, has gone further than Facebook in retreating from the office. The music streaming service announced last Friday that it would allow its employees to work remotely on a permanent basis, in a policy dubbed Work From Anywhere.

The pandemic also disrupted the real estate industry by prompting New York Gov. Andrew Cuomo to temporarily halt thousands of construction projects in the city last year. Despite the global health crisis, Related President Bruce Beal said in a prepared statement that the topping out of 50 Hudson Yards had proceeded on schedule.

Non-residential construction spending in New York City is expected to total $16.6 billion in 2020, according to an October report by the New York Building Congress. Office construction, which typically makes up half of the non-residential total, is projected to rise in 2021 and decline in 2022.

The industry association predicts a decline in core and shell construction and an increase in interior renovations, while some existing structures are expected to be altered to curb the risk of coronavirus transmission.