Plans call for the construction of nearly 3 million square feet in Glendale, Ariz. 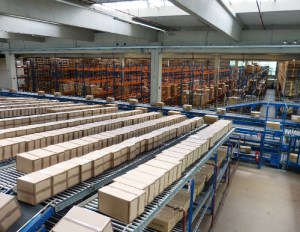 The separate projects from Hopewell Development and The Pizzuti Cos. are being considered by Glendale officials with a Sept. 28 vote on the proposals tentatively set by the City Council.

The council would have to agree on the annexation and rezoning of nearly 180 acres for the projects to move forward, according to the Phoenix Business Journal, which first reported the proposals.

The city of Glendale has been annexing land near and adjacent to the Loop 303 corridor to increase industrial development. Both sites would be near G303, a nearly 1.3 million-square-foot speculative industrial park developed by Hines that was recently leased by MLILY, a China-based mattress manufacturer. The Cubes at Glendale, an industrial park being developed that will eventually have 5.5 million square feet of space, is also nearby.

The architect is Deutsch Architecture Group and the landscape architect is G.K. Flanagan Associates, the Phoenix Business Journal reported.

Hopewell, which began developing in the U.S. in 2010, teamed up with GTIS Partners in January to build Champions Circle Business Park, a 361,000-square-foot, Class A industrial facility in North Fort Worth, Texas, that will be part of the massive AllianceTexas master-planned, mixed-use community.

In February, Republican Distributing Co. leased 173,940 square feet at a newly built warehouse facility owned by Hopewell in the Phoenix suburb of Tolleson, Ariz. Hopewell bought the site in June 2019 and teamed with Sunstate Builders to deliver the property in late 2020.

The Pizzuti Cos., a national real estate developer based in Columbus, Ohio, has proposed building more than 1 million square feet of warehouse and distribution space on 75 acres on the northwest corner of Glendale Avenue and Reems Road. Pizzuti has dubbed the project Bickman Industrial and is planning a 1.1 million-square-foot facility that could be split evenly between manufacturing and warehouse space. The Phoenix Business Journal reported the project may eventually have a second phase that could feature two assets at 609,600 square feet each or one at 748,480 square feet and the second at 470,720 square feet.

Ware Malcomb is the architect and engineer for the project.

Founded in 1976, Pizzuti also has offices in Chicago and Nashville, Tenn., and has developed more than 40 million square feet of industrial projects.

The Top Cities for Real Estate in 2022: Report

Madrid Firm Forms Partnership for Cross-Border Investment in US

Conditions Are Ripe for a Lending Boom. Will Discipline Hold?

The Top Cities for Real Estate in 2022: Report

Madrid Firm Forms Partnership for Cross-Border Investment in US