The tower at 777 Brickell Ave. has earned the ENERGY STAR rating and is a two-time winner of BOMA’s The Office Building of the Year Award. 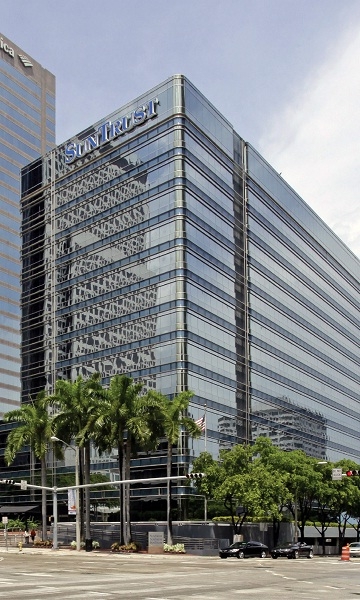 CBRE signed an 18,921-square-foot relocation and expansion release for the building’s 11th floor. The firm previously housed more than 50 employees in 17,327 square feet of space on the ninth floor. CBRE’s Shay Pope represented his own firm in the transaction. Coty Inc. signed a 12,196-square-foot renewal and expansion lease. The firm previously occupied 6,300 square feet on the building’s sixth floor. CBRE’s Grant Killingsworth represented Coty in the transaction.

“We are very happy to have CBRE grow within our building,” said Andrew Trench, managing director at Cushman & Wakefield, in prepared remarks. “Maintaining them as a tenant was obviously a high priority for ownership, and we are excited to deliver their brand new office space in 777 Brickell.”

“Coty is an internationally recognized company, and we are ecstatic to keep them as one of our prestigious tenants,” added Gale. “It was a top priority to entice Coty to remain at 777 Brickell, as many other owners were trying to lure them to their buildings.”

777 Brickell Avenue has earned the ENERGY STAR rating and is a two-time winner of BOMA’s The Office Building of the Year Award. The building is situated at the Main and Main intersection of Brickell Avenue and Southeast 8th Street in the heart of Miami’s central business district. Located minutes from Miami International Airport, the property offers access to major thoroughfares, downtown Miami, the government district, five-star hotels, restaurants and retail.