Industry leaders size up prospects and challenges in the latest CPE 100 Sentiment Survey. 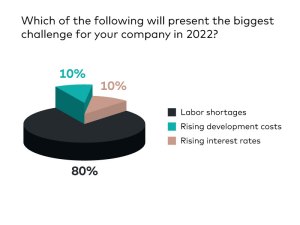 At the end of a tumultuous year, the views of commercial real estate executives about the industry’s near-term prospects and challenges appear to be shifting noticeably, the CPE 100 Quarterly Sentiment Survey indicates. 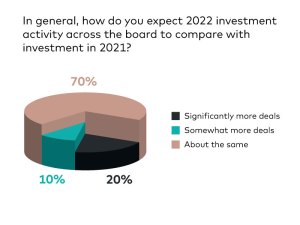 Perhaps the most dramatic change is in the CPE 100’s views of the challenges immediately ahead. A large majority of respondents—80 percent—cite the labor crunch as the likely No. 1 issue for next year, according to the survey of industry leaders. During the fourth quarter of 2020, the issue most often mentioned was reduced opportunities for revenue, named by 42 percent. 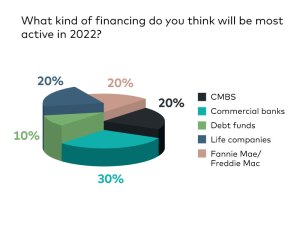 In another notable turnaround, 70 percent of executives expect investment activity in 2022 to be about the same as in 2021. That reflects a big change from one year ago, when 75 percent of those surveyed said that there would be somewhat more deals in the year ahead.

The recent emergence of the omicron variant may have dampened earlier expectations for the near future. For the first three quarters of the year, the share of the CPE 100 which believe that general business conditions will get better over the next six months has hovered consistently between 50 and 60 percent. 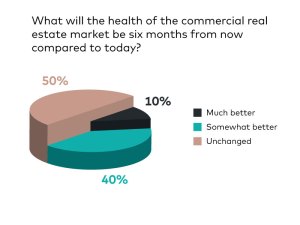 But in the second half, CPE 100 members looking to the next six months have been increasingly likely to say instead that business conditions will be unchanged. Thirty percent of respondents now hold that view, according to the latest survey.

From the third to fourth quarter, the percentage expecting business conditions to get at least somewhat better has slipped from 58 percent to 40 percent. And in a departure from the preceding three surveys, 20 percent of survey participants now think that business conditions will be worse in six months. 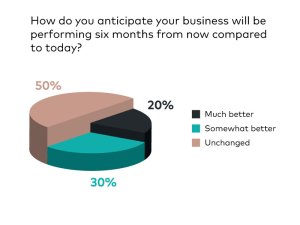 Suggesting a perception that the economic recovery is beginning to level off, Sentiment Survey participants have become more circumspect about the prospects for their own firms’ performance. As recently as the second quarter, 94 percent of the CPE 100 predicted that their companies would be doing somewhat better or much better six months in the future.

By contrast, just half of survey respondents now expect improvement in six months. The share who say that their companies will be doing about the same has jumped from just 6 percent during the second quarter to 50 percent now.