CRE Confidence Is Up in DLA Piper’s Annual Sentiment Survey 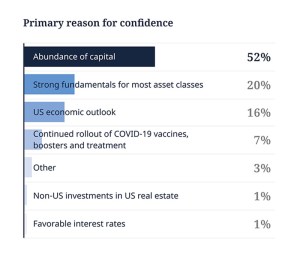 Despite geopolitical uncertainty, rising interest rates and soaring inflation, DLA Piper’s annual sentiment survey finds real estate executives as confident as they were last year and even more so.

Real estate transaction volume rebounded resoundingly in 2021. Transactions not only surpassed 2020, when the market virtually stood still, but also exceeded pre-pandemic levels. This survey would seem to indicate the momentum is continuing.

It should be noted, however, that market conditions have shifted somewhat since DLA Piper surveyed respondents in mid-February and mid-March. If the same respondents were surveyed today, the opinions might be a bit different.

“The increases in interest rates were generally anticipated by the market, but what wasn’t anticipated was the severity of the war in Ukraine and the pace at which inflation has gone up,” Sullivan remarked.

But interest rates are still historically low and, while inflation may curtail development due to rising costs, there is a flip side to inflation for commercial real estate because real estate owners can raise rents to keep up with inflation, Sullivan noted. 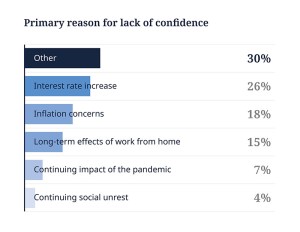 The primary reasons for lack of confidence were “other” (respondents cited increased international tensions in their free-form comments), followed by interest rates and inflation, long-term effects of work-from-home, continuing impact of the pandemic, and continuing social unrest.

Not surprisingly, respondents believe that inflation (84 percent) and interest rate changes (76 percent) will have the greatest impacts on commercial real estate. Seventy-two percent believe e-commerce will have an impact.

The next most influential trend, according to the survey results, is “the redesign/reimagining of office and other commercial spaces.” Sixty-one percent said this would be impactful during the next 12 months.

“Not that it is so much of a surprise, but the message that seems to be coming from that is there are going to be long-term impacts resulting from the whole work from home thing,” Sullivan said. 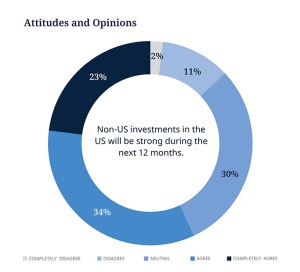 It is a little early to tell definitively, however, whether the changes in office behavior will be permanent, Sullivan remarked, and it can be dangerous to make generalizations about office since new office buildings today have a clear advantage over older buildings.

Forty-four percent of respondents said “migration of workforce from densely populated city centers” would have an impact on the next year. That is consistent with what Sullivan described as the “fairly dramatic” shift of investor interest in what were typically considered secondary cities, particularly those in Sun Belt cities.

“It used to always be the gateway cities,” Sullivan said. “It was New York, San Francisco, L.A. and Boston. All the traditional cities used to be at the top of the list and now you get Austin, Raleigh-Durham, Nashville, Phoenix and Miami as the top cities.”

One surprise for Sullivan was that ESG did not emerge as a more urgent priority in the survey results. Forty-four percent of respondents said ESG would have an impact, but only a third said ESG would move from a secondary focus to a primary focus.

“For almost all of our institutional clients, it is a very important thing,” said Sullivan. “Maybe a little bit of that is how we phrased that in the survey. But I would have thought that came out a little higher.”

While life science’ placement on the list is not remarkable, Sullivan noted, the growth of the property sector over the last two years has been. 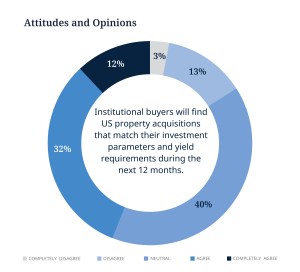 The relationship between the amount of capital in real estate and the confidence in the market is no small matter. Real estate has become a highly important asset class to institutions, as evidenced by the increase in transactions—both the number and size. Meanwhile, the quality of capital participating has strengthened the asset class.

“Real estate, in general, hasn’t gotten overbuilt,” said Sullivan. “There are exceptions but, in general, it has not overleveraged. That has been a big change in over the last 20 years. It used to be more smaller players and higher leverage and, of course, more volatility.”

Private equity, according to respondents, will continue to be the most active type of investor.

“When you have global instability, that often leads to an increase in places viewed as safe havens,” said Sullivan. “The U.S., despite our challenges, is still viewed as the No. 1 safe haven.”