Industrial and e-commerce properties are expected to make the biggest jump in popularity with investors this year, while pension funds and foreign capital will increase their activity more than other institutional investor categories, according to the latest CPE 100 Quarterly Sentiment Survey.

Industrial and e-commerce properties are expected to make the biggest jump in popularity with investors this year, while pension funds and foreign capital will increase their activity more than other institutional investor categories, according to the latest CPE 100 Quarterly Sentiment Survey.

Asked which property category will show the greatest increase in investor appeal, 36 percent of survey respondents identified industrial and e-commerce-related properties as the top gainer. Office properties came in a distant second, named by 21 percent. The results are highlights of the fourth-quarter survey of the CPE 100, an invited group of industry leaders. 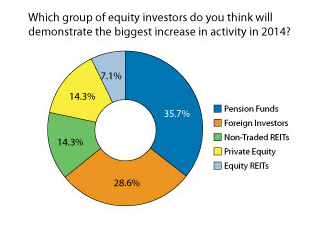 The results suggest that perceptions of the property sectors are evolving and that the cachet of industrial properties continues to rise. As recently as the third quarter of 2012, hospitality was named by 25 percent of the CPE 100 as most likely to show the highest appreciation in value during the next 12 months. In that earlier survey, one third of respondents said that office properties offered the most attractive investment potential.

Those results suggest shifting views on the investment side, although the CPE 100 noted the industrial development trend a year ago. One year ago, distribution and warehouse properties were deemed to be best bets for development potential by one third of respondents, second only to 42 percent that named multi-family properties.

Turning to the makeup of the equity investment pool, the CPE 100 expect cited two groups that they expect to make a move in 2014.  Thirty-six percent say that pension funds will make the largest increases in their allocations this year. Foreign investors are a close second, named by 29 percent of respondents. And the industry appears to be watching the Federal Reserve closely for signs of policy shifts as Janet Yellen assumes the chair. Fifty-seven percent of respondents say that  a hike in the Fed’s baseline interest rate would pose the biggest challenge to commercial real estate investment this year. The broader economic picture ranks as a smaller but still significant worry. Another 43 percent say that a slowdown in the improvement of the nation’s job market is the main threat to investment.

Whatever their concerns, the CPE 100 remain basically optimistic, if somewhat guarded, about the prospects for their own businesses and for the real estate market as a whole. About half of those surveyed say that they expect their own companies to be performing better in three months—the smallest group since late 2012. By contrast, 64 percent of respondents to the prior survey predicted that their businesses would be doing better in three months, and 62 percent said so at midyear.

As for the real estate industry’s overall health, the most consistent result is that conditions will be unchanged in three months. For the second time in three quarters—and only the second time in the past two years—at least some respondents said that they expect the market’s health to be “much better” three months from now; in the most recent survey, 14 percent agreed with the assessment. Another 36 percent took the more circumspect view that the real estate market will be “somewhat better” three months from now.