Construction Labor Continues to be Highly Sought After

Average hourly earnings in construction increased 3.3 percent year-over-year to $30.45, 9.9 percent above the average for all private-sector employees. 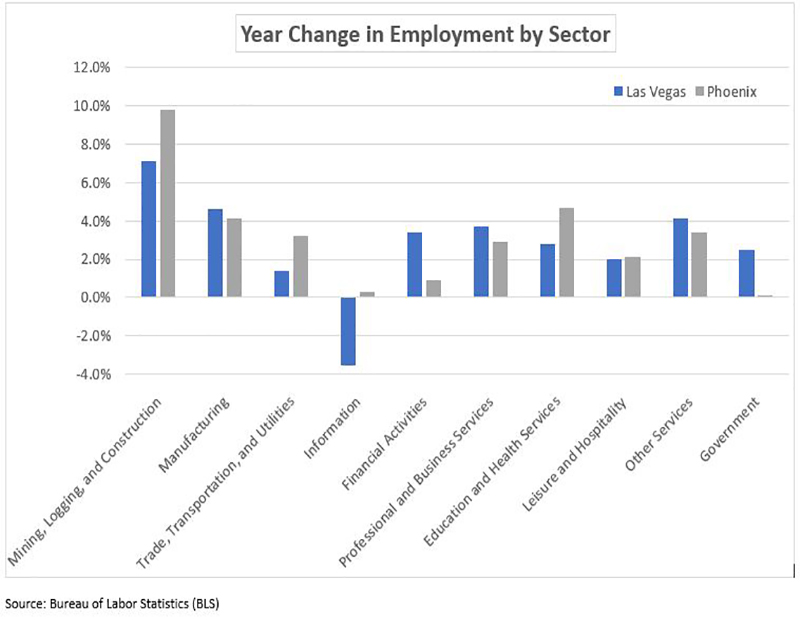 Average construction hourly earnings for March are increasing, the construction unemployment rate is decreasing, and the average weekly hours worked in construction are increasing – all positive signs for the commercial real estate market, according to the Associated General Contractors of America (AGC). However, with the tight labor market, comes the increased competition between construction firms to recruit and retain employees.

Average hourly earnings in construction increased 3.3 percent year-over-year to $30.45, 9.9 percent above the average for all private-sector employees. The Bureau of Economic Analysis released a report in March that detailed wage growth in the United States and construction was the leading contributor to the earnings increase in two states—Nevada and Arizona, 5.7 percent and 5.5 percent increases, respectively. The mining, logging, and construction employment sector ranked as the top sector for employment growth in each of those markets, as well. If this trend continues, competition between these two markets could heat up due to their proximity, and compensation could be a deciding factor for potential employees.

Last month, the construction unemployment rate, not seasonally adjusted, fell to 5.2 percent nationally. Also, the number of unemployed workers with construction experience declined, falling to a 20-year low—leading to a shortage of construction labor in the market. AGC conducted a 2018 Workforce Survey that included approximately 2,500 responses from construction professionals. Eighty percent of respondents reported that they are having a hard time filling hourly craft positions and 56 percent reported a hard time filling salaried positions. Only 1 percent of companies reported that it will continue to be easy to hire or will become easier to hire in the next year.

One sector of the population that companies are turning to is women. According to the National Association of Women in Construction, participation of women in the construction industry is at about 9 percent. Women in construction is a relatively untapped market that could pose some relief for construction companies struggling to find labor.

The average weekly hours worked in construction rose to 39.9, the highest March level in the 14-year history of the survey. Construction workers are working longer hours and are being paid more for those hours worked. Anurban Basu, CEO of economic consultant Sage Policy Group, noted, “There is a lot of work out there, but workers to do that work are getting more expensive, which means increasing volume does not necessarily mean increased profits.” 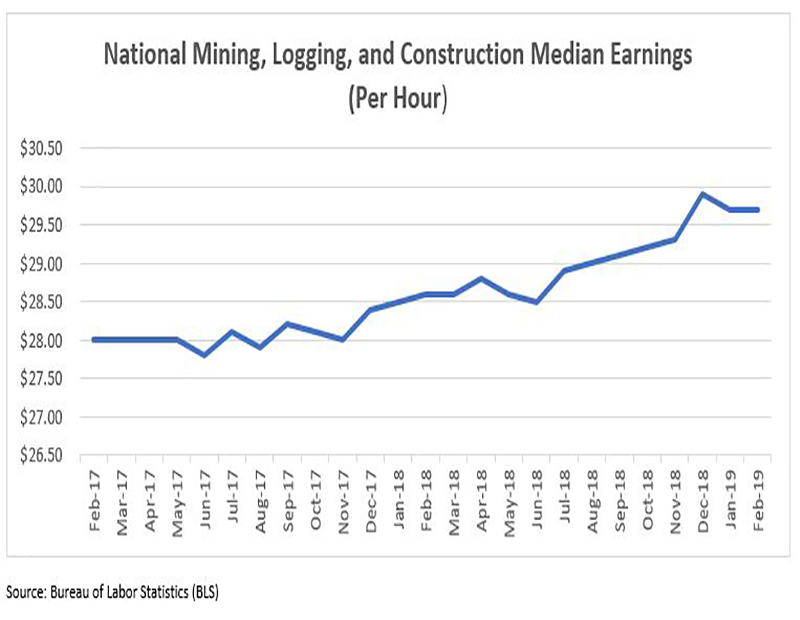 Engineering News-Record conducts a quarterly Construction Industry Confidence Index (CICI). The first quarter of the 2019 survey included 205 executives from large construction and design firms. Of the total, many believe that the market will begin to decline sometime in 2020. However, only 3 percent believe the market has started to decline now and only 6 percent believe it could start in the next three to six months. Executive sentiment about the current market was also measured on a ratings scale. A rating above 50 shows a growing market. The first quarter of 2019 resulted in a rating of 59.

Another measure of construction industry confidence, the Confindex survey from the Construction Financial Management Association (CFMA), polls 200 CFOs from general and civil contractors and subcontractors. The CFMA is based on four separate financial and market components, each rated on a scale of one to 200. A rating of 100 indicated a stable market; higher ratings indicate market growth. Stuart Binstock, CFMA’s CEO, stated, “The Confindex fell from 114 in the previous quarter to 109 in the current quarter, noting it is the lowest rating since late 2010.” The forward-looking ‘general business conditions’ and the ‘year-ahead outlook’ both fell, as well.

Where will construction spending be focused in 2019? Total engineering and construction spending in the United States is forecast to increase by 3 percent in 2019, compared to 4 percent in 2018. Fails Management Institute (FMI) released their top performing segments for 2019: transportation (+9 percent), public safety (+6 percent), and educational (+5 percent). Forecast bottom-performing segments in 2019 include religious (-5 percent), multifamily (-5 percent) and lodging (-2 percent).

One area where we can expect an increase in construction spending: opportunity zones. Since the tax reform passed in December 2017, the commercial real estate industry has been buzzing about the significant tax savings that investment into the zones could provide. While there has been limited activity in these zones thus far, construction activity is expected to ramp up as investors begin to understand the logistics of investing in opportunity zones. Thus, the need for more construction employees to work on these projects will likely increase over the next few years. The top three markets with the most planned/prospective multifamily units located in opportunity zones are Miami (27,341 units), Metro Los Angeles (25,426 units), and Washington D.C. (24,492 units), as of March.