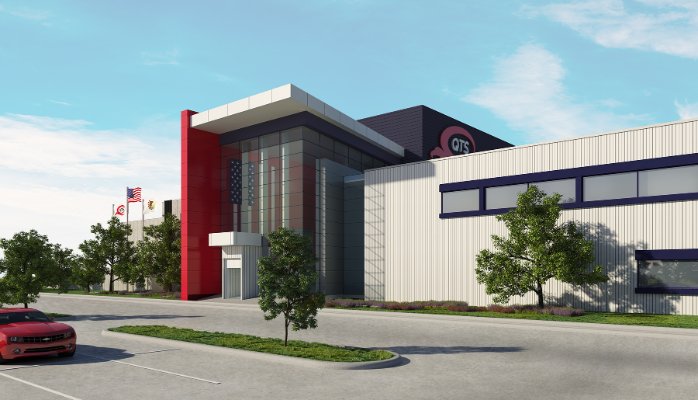 Chicago—Hold the presses! The former Chicago Sun-Times printing plant in the city’s Pilsen neighborhood has been transformed into a state-of-the-art data center to serve the growing demand by downtown businesses and clients in need of cloud solutions, colocation and other data center services.

The 30-acre site is owned by QTS Realty Trust, which bought the shuttered printing plant for about $18 million back in 2014. QTS, an international provider of data center, managed hosting and cloud services, selected Mortenson Construction to redevelop the 317,000-square-foot building into a mega data center. Mortenson said on its web site that the construction cost is about $80 million.

The company is planning an open house on July 15 to showcase the Phase One completion.

“We are pleased to formally open our new Chicago data center that extends our platform delivering a broad selection of integrated IT infrastructure services for Chicago and nationally,” Dan Bennewitz, COO of sales and marketing at QTS, said in a prepared statement. “We are focused on a collaborative, high-touch enterprise approach serving the dynamic needs of today’s agile enterprises seeking a partner that can right-size flexible and scalable IT solutions for today and tomorrow.”

Andy Stapleton, the Mortenson executive who led the renovation, said the data center is needed in Chicago.

“There is pent-up demand for data center capacity, especially so close to downtown, as every company from startups to global leaders are increasingly moving to digital businesses built on collecting, crunching and analyzing enormous amounts of data to create products and services,” he said in a prepared statement.

A report on the North American data center market issued this winter by JLL said the market in Chicago will remain tight with demand driving up rents. JLL noted that downtown Chicago, while a desirable location, “is limited on product due to security and space issues.” The report said several data service providers, including Digital Realty Trust Inc. and DuPont Fabros Technology, are planning to expand in Chicago this year.

Mortenson and QTS, along with consulting engineer ESD Global and lead architect Corgan Associates, repurposed parts of the building. Mortenson added bigger doors to some of the old loading docks, making them the entry point for a secured receiving area with 10-foot clearances for servers and other equipment. The reinforced floors that supported the printing presses are ideal to hold heavy electrical equipment.

The company did gut parts of the building and constructed new office space and shared “touchdown” rooms near the data hall so clients can work at the QTS facility. Amenities were added such as first- and second-floor break rooms and the team plans an onsite gym.

“Mortenson’s expertise in data center construction, the Chicago market and adaptive reuse is second to none and these strengths came together beautifully in our Chicago data center,” Nabon Marsico, QTS Chicago site director, noted.

QTS owns, operates or manages more than 5 million square feet of data center space and supports more than 1,000 customers in North America, Europe and Asia Pacific. Last month, it acquired a 360,000-square-foot data center in Piscataway, N.J., for $125 million. The 18 megawatt facility is located on a 38-acre campus in close proximity to New York City’s global financial and business districts.