CBRE Global Investors has acquired 201 17th St., a 349,400-square-foot, 17-story, Class A, LEED Gold–certified office tower built in 2007. The Atlanta offices of CBRE will manage and lease the building, which is currently 48 percent leased. 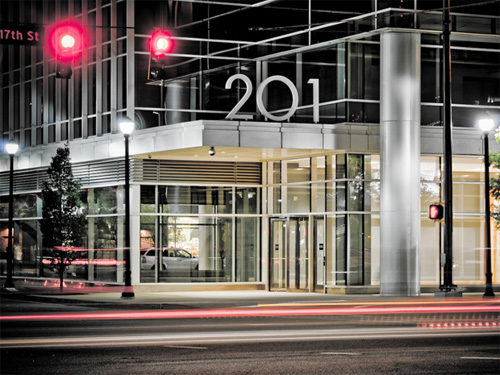 Adding to its stable of properties in Midtown Atlanta’s Atlantic Station project, CBRE Global Investors has acquired 201 17th St., a 349,400-square-foot, 17-story, Class A, LEED Gold–certified office tower built in 2007, the company announced Wednesday. The Atlanta offices of CBRE will manage and lease the building, which is currently 48 percent leased.

The acquisition was made through a note purchase and simultaneous deed conveyance and was made on behalf of the CBRE Strategic Partners U.S. fund series. The purchase price was not disclosed.

Built on a former steel-mill site, Atlantic Station began to open in 2003 and now encompasses 138 acres near the I-75/I-85 intersection north of downtown Atlanta. The mixed-use, master-planned development won the 2004 Phoenix Award for brownfield redevelopment from the National Brownfields Conference, whose sponsors include the U.S. Environmental Protection Agency.

201 17th St. will be repositioned, and part of that will be the application of Strategic Partners’ 5-Star Worldwide amenity suite. Todd Frye, principal with CBRE Strategic Partners U.S., explained to Commercial Property Executive that this is “a scalable suite of amenities.” Although plans for the new building aren’t yet final, he said, a shared conference facility is likely, and an available first-floor space might become a fitness center.

In addition, a “spec suite” program will offer fully built-out space for tenants seeking a turnkey office option. Frye estimated that five to seven such spaces will be created, all with high-end finishes and likely ranging from 1,500 to 4,000 square feet. Target tenants include technology-oriented or creative-services companies.