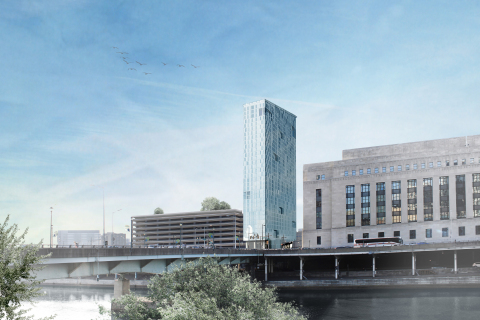 Under the joint venture of Brandywine Realty Trust, Campus Crest Communities Inc. and Harrison Street Real Estate Capital, Brandywine and Campus Crest will each own 30 percent of the development while Harrison Street will own 40 percent. It will be financed by a $97.8 million loan provided by PNC Bank, N.A. as administrative agent and Capital One, N.A., as syndication agent.

Construction on The Grove at Cira Centre South has begun and is expected to be ready for students by the fall of 2014, Campus Crest CEO Ted W. Rollins told Commercial Property Executive. Located at 2930 Chestnut Street on land leased from the University of Pennsylvania, the project will be part of Brandywine’s Cira Centre mixed-use development on the west bank of the Schuylkill River.

The project is aimed at graduate and undergraduate students from Penn and Drexel University, which both have enrollments of about 25,000, as well as numerous other colleges and universities in the surrounding area. It will have amenities including a rooftop swimming pool, media lounge, 24-hour fitness center, a library technology center, coffee service and first floor retail. Campus Crest will act as property manager and will staff the facility with a general manager, leasing manager and security. It is located within walking distance to shops, transportation and university facilities.

The Grove at Cira Centre South is expected to achieve LEED Gold certification. Rollins said the team is working with the Institute for the Built Environment, which Campus Crest has used before for guidance on sustainability issues. The project is being designed by architect Erdy McHenry in consultation with Cira master plan architect Cesar Pelli.

Rollins said this is the first time Charlotte, N.C.-based Campus Crest, which entered the student housing business in 2004, has worked with Brandywine. Headquartered in Radnor, Penn., Brandywine specializes in urban, town center and office properties. Its portfolio consists of 297 properties and 34.6 million square feet, including Cira Centre, a 29-story office building which opened in 2006.

“We feel proud that we were selected to be their student housing partner,” Rollins told Commercial Property Executive.

Rollins said he and Gerard H. Sweeney, president and CEO of Brandywine, were brought together about two years ago by their mutual banker at Barclays. Barclays advised Campus Crest on this transaction.

“Gerry Sweeney and I had a chance to meet. We got along and we went through a process talking about what we both had as a vision,” Rollins recalled. “One thing led to another.”

“We have a great relationship with them,” he noted. “We’ve done half a billion (dollars) of projects with them.”

“We look forward to further expanding our successful Cira Centre development and shaping the Philadelphia skyline with our new partners,” Sweeney said in a prepared statement. “We recognized the strong demand for graduate and undergraduate student housing in University City and selected Campus Crest for its proven operating platform and track record of success.”

“Brandywine and Campus Crest are industry leaders and we are proud to be affiliated with them both,” Christopher Merrill, co-founder, president and CEO of Harrison Street, stated in the release.

For Campus Crest, the Philadelphia project is its biggest to date, but the REIT has been steadily growing, particularly in the last two years, Rollins said.

In late 2011, the REIT announced it had a $156.8 million pipeline planned for student housing projects that would add 1,282 units. In fall 2012, Campus Crest opened six new facilities in Auburn, Ala.; Laramie, Wyo.; Flagstaff, Ariz.; Fayetteville, Ark.; Orono, Maine; and Stillwater, Okla. The REIT has a total of 39 properties in 18 states with nearly 21,000 beds.

Rollins said the REIT will continue to seek out attractive opportunities for student housing throughout the United States.