By Gail Kalinoski
May 31, 2019
BrokerageDealsFeaturedInvestmentNationalNewsRetailTechnology

B+E brokered the sale-leaseback deal, which is believed to be the largest commercial real estate transaction sold through a digital platform. 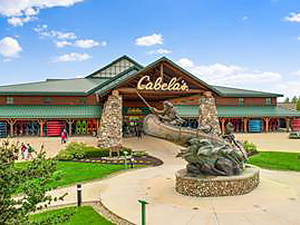 Exterior view of a Cabela’s store. Image courtesy of B+E

A joint venture led by Sansome Pacific Properties has acquired 11 Cabela’s locations from Bass Pro Shops for $324.3 million in a sale-leaseback deal brokered by B+E. It is believed to be the largest commercial real estate transaction brokered by a digital platform.

The properties encompass more than 1.6 million square feet of space with an additional 277 acres of land. The sale-leaseback term for the assets is 25 years. The locations of the stores were not released. Bass Pro Shops, a privately-held retailer of outdoor recreation merchandise and North America’s premier outdoor and conservation company, acquired the rival Cabela’s sporting goods chain in September 2017 in a $5.5 billion deal.

“We didn’t make a deal. We got beat out, frankly. Here we are now as it all came together,” he told CPE. “They’re a very unique retailer. As much as we are generally running away from big box retail, we are very bullish on the credit, the operators, the people behind the company,” Souza said. “They are one of one. They don’t compare with anyone else. Lots of other tenants sell similar stuff but they don’t have the experience and the business model.”

For both Sansome Pacific and Bass Pro Shops, the sale-leaseback transaction is the first time both entities have worked with B+E, a brokerage and technology platform for net lease real estate that was launched in December 2017 by co-founders Camille Renshaw and Scott Scurich. B+E, which has offices in New York, San Francisco, Chicago, Atlanta and Tampa, Fla., uses artificial intelligence combined with senior people to track the most active buyers in the real-time, net-lease market. B+E was created specifically for trading NNN property from origination to close, backed by the largest NNN data set in the industry.

Renshaw, B+E’s CEO, told CPE the firm’s average net lease transaction is about $5.5 million. Smaller deals tend to be 1031 exchanges, she noted.  Prior to the Cabala’s deal, B+E’s previous largest transaction was a $76 million sale-leaseback. She declined to name the entities involved in that deal.

Before founding B+E, Renshaw and Scurich both worked for Ten-X, the nation’s leading commercial real estate marketplace that enables investors and brokers to buy and sell properties online. They believe that prior to the Cabela’s sale-leaseback deal with the Sansome Pacific JV, the largest CRE transaction brokered by a digital platform was a Ten-X deal for about $96 million. “We’re very excited about it,” Renshaw told CPE. “Bass Pro was really pleased with us. We brought them multiple offers.”

“There’s something wildly different about what we’re doing,” she added. “It’s a place that you can sell things for their highest values. It’s also a place where you can buy something that’s very low risk that’s of great quality.”