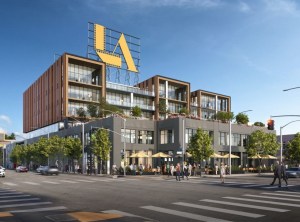 Located in the heart of Hollywood, the 6.4-acre site at 6311 Romaine St. is one of the largest development sites in the Los Angeles area. Spanning two city blocks, it is bordered by Santa Monica Boulevard to the north, Cahuenga Boulevard to the east, Willoughby Avenue to the south and Cole Avenue to the west. The property used to be the headquarters for Technicolor and studio lot for Metro Pictures Corp. The existing facility, built between 1930 and 1966, currently offers about 183,000 square feet of creative office and studio space.

Bain and BARDAS, which formed a joint venture in 2019 to pursue opportunities to acquire, renovate, develop and operate creative office and other production space particularly in the Los Angeles area, are planning a state-of-the-art production facility that will be combined with the preservation of many of the distinctive buildings constructed during Technicolor’s heyday. The new studio campus will be rebranded as Echelon Television Center, according to David Simon, BARDAS founder & managing principal. Construction is expected to start in 2024. 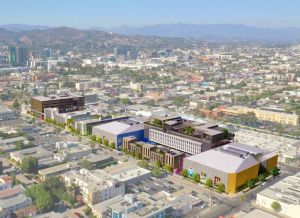 Simon said in prepared remarks the project represents the company’s continued focus on redeveloping infill product for the entertainment and media industries in the content capital of the world. He said revitalizing the old home of Technicolor and Metro Pictures represents a great opportunity to keep Hollywood in Hollywood.

The partners acquired the site in March. They plan to keep the original art-deco façade on the northern block and use it to enclose a studio lot that will be bookended by a new mid-rise creative office building with ample private outdoor terraces with views of the Hollywood Hills. The new construction will replace a parking lot and two dilapidated buildings on Santa Monica Boulevard. On the southern block, a vacant parking lot will become the site of four large soundstages with a basecamp. A six-story creative office building will also be built at that site along with production support space, private rooftop office bungalows and decks.

The property will be managed under the joint venture’s Echelon brand, which provides hospitality programming and services including on-site experiences, wellness platforms, food and beverage branded operators and on-site management catering to the needs of the media and entertainment community. To date, the joint venture has invested in and has a pipeline of existing and new development projects encompassing more than 1.5 million square feet.

Last year, the joint venture announced plans for a $450 million urban studio campus at a 5-acre site located at 5601 Santa Monica Blvd. in Hollywood. That plan, called Echelon Studios, will have four 19,000-square-foot sound stages, a 15,000-square-foot flex stage and a 90,000-square-foot creative village of high-end bungalows. The project, expected to begin in 2023, will also have 350,000 square feet of creative office space spread across two six-story buildings.

Joe Marconi, Bain Capital Real Estate managing director, said in a prepared statement BARDAS and Bain have strong conviction in the demand drivers that are fueling continued growth of the media and entertainment industry. He said they were excited to honor the past of the Television Center site while delivering a project curated for today’s content creators in the heart of Hollywood.

They are not the only investment groups seeing movie and television studios as a viable growth industry due to the rise of streaming services and need for more media and online entertainment content. California has seen massive investment in the sector within the last decade, including a surge of new studio development projects.

Hudson Pacific Properties is among the developers expanding their soundstage footprint in the Los Angeles area. The company runs Sunset Studios, which currently has about 3.5 million square feet of soundstages and office space. Sunset Studios is jointly owned by Hudson Pacific and funds managed by Blackstone and is building Sunset Glenoaks in Sun Valley, which is estimated to cost about $190 million and will have seven flexible stages and 120,000 square feet of support space.

Hackman Capital has made about $3.8 billion in studio investments in the past three years and has 90 stages under construction. Other projects have been announced by Sylmar Studios, East End Studios, Quixote Studios and Shadowbox Studios.