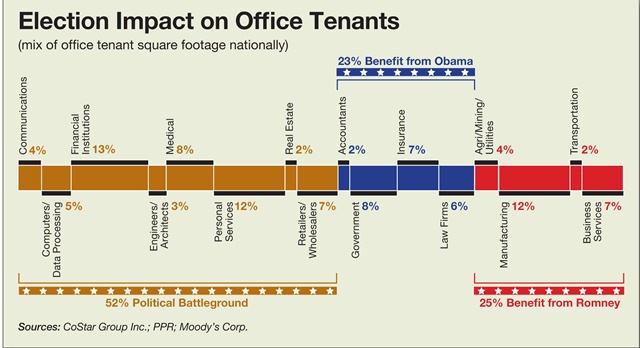 Now that Washington has shifted out of campaign mode, all eyes are on our leaders to clear up the fog of uncertainty that continues to hinder economic recovery. While the election outcome did reinforce a divided government, both industry and political experts are optimistic that the House, the Senate and President Obama are up to the task of working through this gridlock to tackle the fiscal cliff and budget deficit.

“I am more encouraged moment to moment that we are going to see a dawn of bipartisanship,” said Raphael Bostic, director of the Bedrosian Center at the University of Southern California and former assistant secretary of the Department of Housing and Urban Development under President Obama. “The one piece of uncertainty, however, is that there is this constituency of House Republicans that are extremely ideological, and they have declared themselves unwilling to compromise on anything. We will just have to watch and see whether House Speaker Boehner can manage that part of his caucus. If he can do that, I think that we are looking good.”

Bostic expects to see a robust period of economic growth once the uncertainty over the particulars of cuts and revenue generators is resolved. While a major caveat in his outlook is Europe—particularly economic exposure that some U.S. companies may not have yet internalized—Bostic believes that the United States will remain the flight-to-safety location. This is good news when it comes to capital availability for all aspects of business, commercial real estate included.
While both parties have adopted a more civil tone since the fracas that birthed the Budget Control Act of 2011, though, there is not likely to be a permanent bridge over the fiscal cliff anytime soon, cautioned Joe Markling, chair & chief elected officer at BOMA International, as well as a managing director of strategic accounts at CBRE Group Inc.

“My thought is that we are going to have another patch that is going to get us through the end of December with the promise of some change—the so-called ‘grand bargain’—but there will still be some uncertainty,” Markling said.
He added that the Obama administration seems to believe that the re-election is a mandate for the “tax-the-rich plan.” This will inherently add to the partisanship surrounding the fiscal cliff, as both parties are up against a wall of compromise. If the Republicans give on taxes, the Democrats will have to give on spending cuts and entitlement reform. Markling hopes that the current administration is successful, as both he and his members are looking for the government to get its house reasonably in order, or at least tidy enough to allow for some form of short-term certainty.

“It is just a fog bank out there at the moment,” he added. “If you are buying a building this year and you don’t know what the capital gains rate is going to be, and you don’t know what the leasehold depreciation rate is going to be, all of a sudden there are variables added into your risk model. That is what is hurting our industry right now: the uncertainty of it all.”

One thing that is certain, however, is that the Obama win benefits a specific set of office tenants. That group includes law and accounting firms, health insurance companies and the federal government, according to a report issued by CoStar Group’s Property and Portfolio Research. Together, these sectors occupy about 23 percent of national office space and may require a larger footprint down the road once uncertainty dissipates and the economy improves, according to Hans Nordby, managing director of PPR, who leads a team of 47 economists. A Romney win, on the other hand, would have benefited business services, transportation, manufacturing and utilities—which together take up about 25 percent of national office square footage. But regardless of who is now sitting behind the Resolute desk, Norby is optimistic about a thoughtful resolution—though it may take some time.

“The government will be making some hard choices like they did in the ’92 to ’96 period to cut back on spending. In that case, the government shut down in 1994 and everyone thought it was the end of the world. And you know what? It was a good thing. People focused on the money and the income, and they brought the budget into balance and the economy grew strongly. The track record of gridlock is that it is the best thing for the U.S. economy ever. Bring it on.”