With MIPIM 2013 just around the corner, nominees of the nine categories of the MIPIM Awards are abuzz with anticipation. 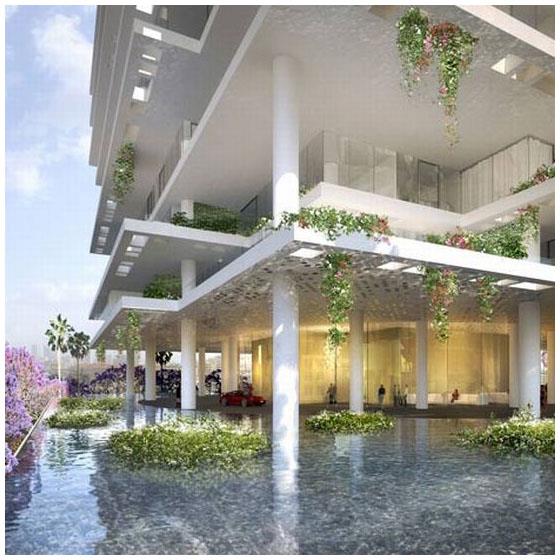 With MIPIM 2013 (international real estate show for professionals) just around the corner, nominees of the nine categories of the MIPIM Awards are abuzz with anticipation. Among the nominees is Beirut Terraces, Benchmark’s 130-unit luxury residential project, currently under construction in Mina El Hosn, the Lebanese capital’s central district and most high-end residential area.

If successful, the “Best Futura Project”-nominated property will be the first global award winner from Lebanon. Other projects nominated in the category include Culture Casbah in Malmo, Sweden, Nanjing River West CBD in Nanjing China and The Square 3 in Berlin, Germany.

Designed by Swiss architects Herzog & de Meuron, Benchmark Development SAL’s $460 million project is inspired by Beirut’s rich history and optimism towards its future as well by consideration of the moderate climate which makes outdoor living a fundamental part of the city’s urban culture. The 390-foot high Beirut Terraces is the first vertical village project complete with extended hanging gardens and extended terraces to rise in the Lebanese capital. Its architecture is defined by five principles: layers and terraces, inside and outside, vegetation, views and privacy, light and identity. These principles permeate the entire structure, reflecting in each aspect and area of it: by mixing two-, three and four-bedroom units in different formations on each floor combined with randomly distributed hanging gardens on each floor plate ensure diversity between units. The gardens and terraces however are significant beyond their aesthetics – they help create microclimates around individual units, by tempering the immediate environment and offering shade. Furthermore, the use of vegetated screens is an integral part of ensuring privacy and framing views – views of the city, marina, coastline and mountains, unobstructed by the apartments’ floor-to-ceiling windows.

Residences generally feature a public reception area complete with private lobby and dining area, a private living space including bedrooms with en-suite bathrooms and walk-n closets, as well as a family living room, while the service area features high end kitchens with stainless steel, granite or high end resin finishes with storage and laundry room attached, as well as a maid’s quarter with bathroom. Furthermore, the structure is carried by the core – apartment walls are not structural, allowing for future reimagining of unit layouts.

Community amenities are located on the ground floor and include a reflective pool, resident’s fitness center, outdoor swimming pool, spa complete with sauna, steam and massage rooms, a private function terrace on the first floor and concierge services.

The property’s residential component will occupy 25 stories of the 26 levels located above ground. One story will contain street-level retail space, with a separate entrance. Beirut Terraces will also feature a five-story underground complex, containing separate parking areas for residents and visitors, drivers’ quarters and storage rooms.

As a project that is inspired by the past but also looks towards the future, Beirut Terraces will hold to environmentally friendly standards by featuring a sustainable heat loop system and water recycling scheme, environmental control system,. Energy efficient floor heating and air conditioning, solar water heating system, energy efficient LED and low consumption lights, as well as passive energy efficiency measure such as the use of the hanging gardens for cooling, as well the implementation of protruding floor slabs that reduce solar gain, and, by their specific thickness, balance out daily temperature cycles, storing the night’s cold and releasing it throughout the day.