Insights on what's ahead next year from two of the industry's leading economists.

As emerging real estate companies set their sights on their prospects for 2020, any number of issues are top of mind. Among them are the trade dispute with China, the potential for a recession, and the extremely tight labor market.

To shed light on this complex set of issues, CPN invited perspectives from two of the nation’s leading real estate economists: Ryan Severino, chief economist at JLL, and Hugh Kelly, chair of the curriculum committee at Fordham University’s Real Estate Institute and a columnist for Commercial Property Executive. They identified three key issues for owners of smaller and emerging real estate companies to consider as the new year approaches. 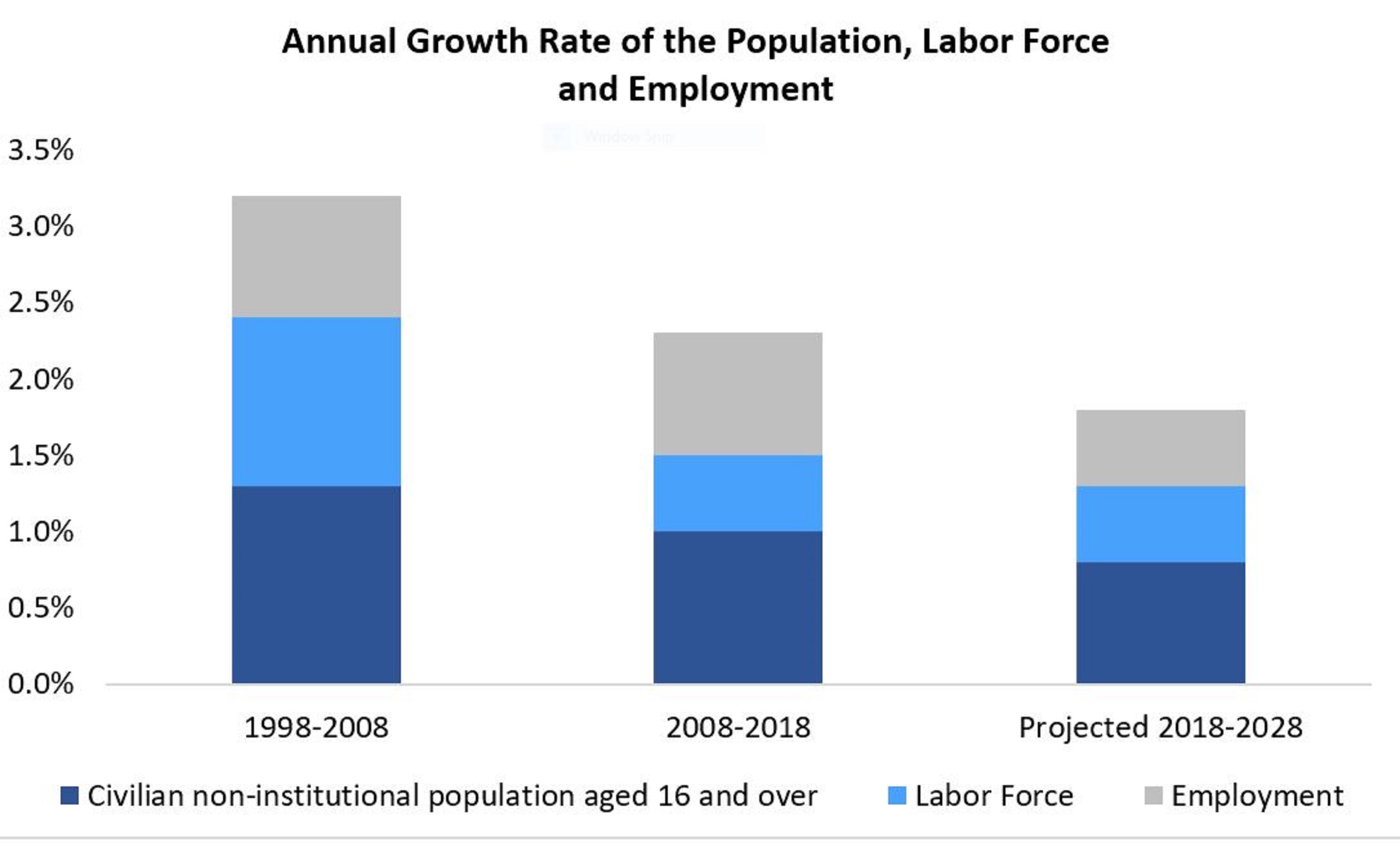 Both economists mentioned labor as one of their top concerns for 2020. The labor market is extremely tight, with a 3.5 percent unemployment rate – the lowest since December 1969. There is currently less than one unemployed person for every one job opening.

While there is still a gap between the percentage of the prime-age population that is in the labor force (80.9 percent) and the percentage that is employed (78.3 percent), Severino is concerned about the quality of that labor. Clamping down on immigration, legal and illegal, isn’t helping either and is further exacerbating the shortage of qualified workers. The scarcity of qualified workers specifically puts smaller, entrepreneurial companies at a disadvantage compared to bigger, global firms that can afford to attract talent by offering higher wages and benefits.

Kelly cited another point about the long-term health of the labor force – the annual growth rate of jobs over the next decade (2018-2028) is expected to slow to 0.5 percent, compared to the 0.8 percent annual growth rate that the economy enjoyed from 2008 to 2018.

An aging population will contribute to this shift, along with a decline in immigration. These lower job projections will be distributed unevenly, making it crucial to be aware of local economic conditions. Kelly recommends joining the local chapter of National Federation of Independent Businesses as an effective way to keep up with local market conditions.

The economic threat posed by geopolitical risk is the highest it has been in decades, according to Severino, and it is showing up in new kinds of places. This kind of uncertainty was once associated primarily with developing countries, but lately it is also surfacing to some extent in the U.S. and Europe. An an example, Severino cited the unpredictability of trade relations with China.

The status of a potential deal seems to vary almost week to week. Severino warned that if any of these issues break the wrong way, they could reverberate through the economy in unpredictable ways.

Kelly cautions smaller companies to be careful in markets that are reliant on industries affected by trade or tariff issues, particularly markets dependent on the manufacturing and agricultural industries. These sectors will not easily rebound from the trade war, he warns.

We are amid the longest economic expansion ever, at 126 months and counting. Plenty of capital is available and underwriting is still disciplined. However, forecasters surveyed by the National Association of Business Economists put the odds of a recession by the end of 2020 at 43 percent and the odds of a recession starting by mid-2021 at 66 percent. Kelly emphasized that in uncertain economic conditions, small businesses need to stay disciplined when placing capital, especially when considering loan-to-value ratios. Anything above 60 percent is extremely risky right now. The question for small business owners, he advises, is: “As I make a real estate investment, do I have the ability to withstand a downturn?”

He also noted that one could argue that since the stock market is at an all-time high, why worry about a recession? But stock performance is not a reliable predictor of a downturn; the stock market also reached near-record highs before the savings and loan crisis, prior to the bursting of the dot-com bubble and the Great Recession.

He did suggest ways to mitigate risks, such as extending leases for commercial properties to lock in long-term rents at today’s level. Besides providing owner security, the step benefits the tenant by making long-term planning easier and eliminating concerns about relocation costs. Another option is to refinance the property at today’s low interest rates.

Multifamily and industrial are two sectors that are often regarded as most attractive and will continue to be moving into 2020, given the ability for companies to participate on a relatively smaller scale. Kelly especially likes last-mile industrial properties as a fit for smaller investors and contends that it’s nearly impossible to go wrong with workforce housing. The economists also named several other asset categories that provide attractive options for emerging real estate companies.

Retail has often been unfairly maligned because of the long-term transformation that is under way. However, both economists suggested neighborhood/community shopping centers as an overlooked asset class. As Severino noted, “There are centers out there that can perform well, certainly if they are in the right area with a strong grocery tenant.” Kelly also suggested the re-development of a neighborhood shopping center, including re-tenanting, to get a new mix of uses.

Self storage has been a hot asset class over the last decade and Severino believes that it will continue to perform well. He noted that the risk of the asset class comes in the development and lease-up phase. Once stabilization is achieved, the operation of the facility becomes relatively automated, characterized by predictable occupancy and cash flow.

Kelly identified this specialty as one that could be the right size asset for many smaller entrepreneurs. Urgent care centers offer promise because of the aging of the population and patients’ search for convenience and efficiency in their medical care.