More than 3.7 million square feet of office space was under construction in the metro as of July, according to Yardi Matrix.

Despite the pandemic’s severe impact on Florida, real estate development in the Miami office space market has forged ahead. As of July, the metro’s office pipeline included 18 projects totaling more than 3.7 million square feet, Yardi Matrix data shows. Most of the upcoming projects are mixed-use and transit-oriented, while two of them—included in the list below—are headquarters developments.

Groundbreaking work has been completed for two projects so far in 2020, while four developments encompassing 341,000 square feet have come online year-to-date. Additionally, nearly 2.2 million square feet is slated for delivery by year-end. Here’s a breakdown of the largest projects under construction in the metro as of July, based on Yardi Matrix data. 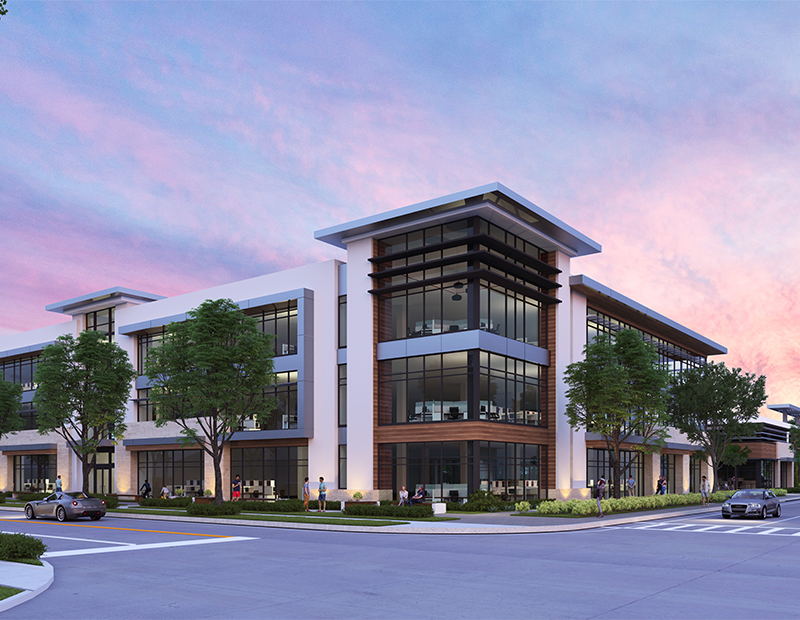 AJP Ventures and Mas Group broke ground on MedSquare Health—the only medical office building on the list—in February 2019. IberiaBank provided $36.5 million in construction financing, while completion is scheduled for later this year.

The three-story, 128,800-square-foot building is taking shape on the site of a former synagogue, at 9408 SW 87th Ave., in the Miami West submarket. Situated across from Baptist Children’s Hospital—one of the metro’s largest hospitals—the project is the first off-campus, premier medical facility to be developed in the area in the last 20 years. 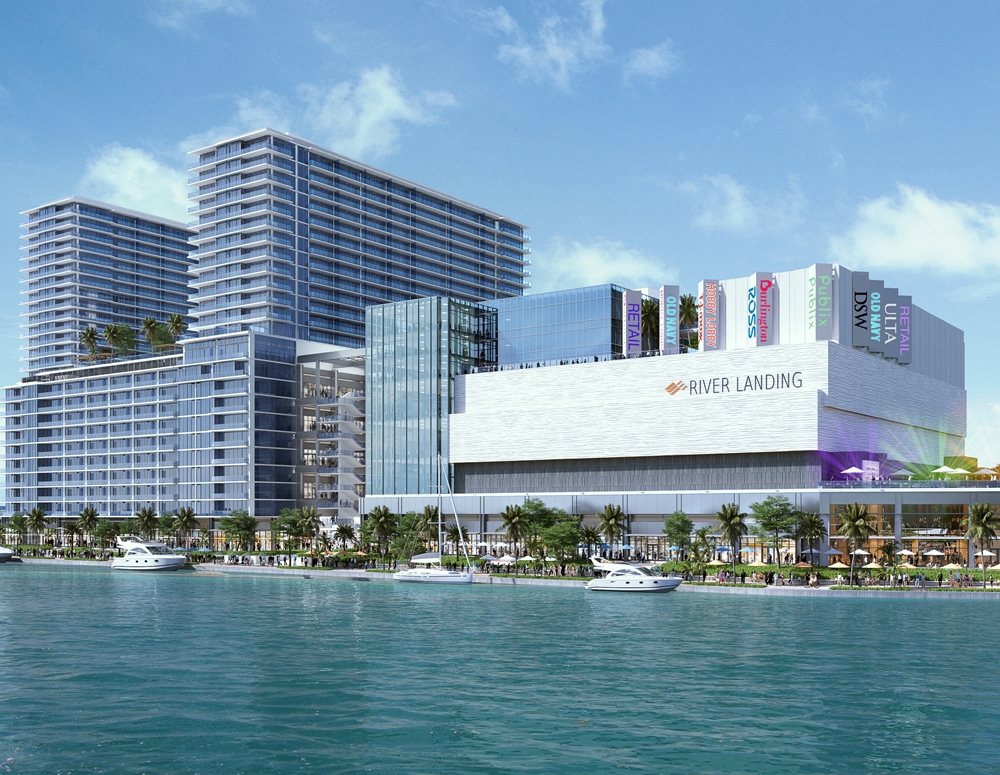 Urban-X is developing the $425 million River Landing, a mixed-use project also in the Miami North submarket. Located on 8 acres, the development will incorporate two residential towers and a 345,000-square-foot retail component, along with a 135,000-square-foot, seven-story office building expected to come online in the third quarter of 2020. Located at 1400 NW North River Drive, River Landing is located in one of the most heavily concentrated areas for medical and research facilities in South Florida, a region underserved in retail and residential space. 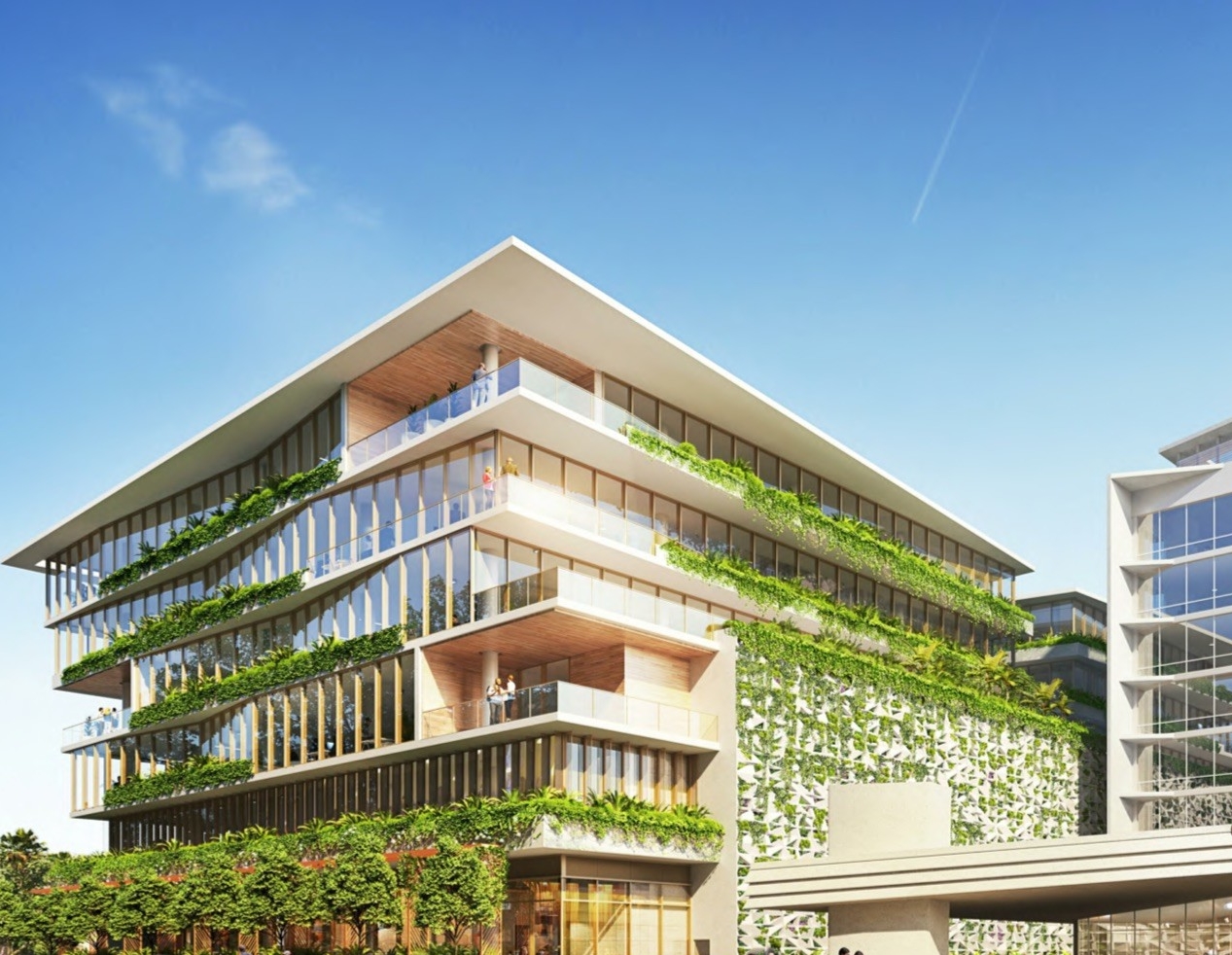 Starwood Capital Group relocated from Connecticut to Miami Beach, Fla., in 2018 and started work on its upcoming headquarters in September 2019. Delivery is scheduled for the end of 2021. The six-story, 144,430-square-foot building will encompass first-floor retail and restaurant space, and will house 300 employees. A Coastal/Brodson joint venture serves as the general contractor and Integra is the developer. Citizens Financial Group originated $76 million in construction funding for the Gensler-designed project.

7. The Gateway at Wynwood 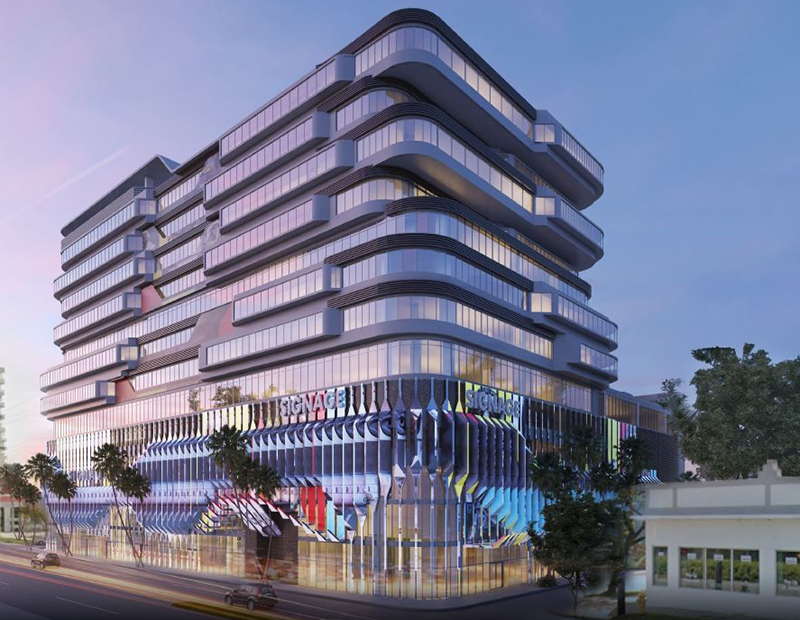 Rose & Berg Realty Group’s 12-story The Gateway at Wynwood is one of the two office buildings on our list that broke ground in 2020. Completion of the 220,900-square-foot asset is expected in September 2021. Kobi Karp is the architect and Plaza Construction serves as the general contractor.

Situated at 2916 N. Miami Ave. in the Wynwood district, the location is easily accessible from both Fort Lauderdale and West Palm Beach. Additionally, it is convenient to large transportation hubs such as Miami International Airport and PortMiami.

Agave Holdings started developing The Plaza Coral Gables—the largest mixed-use development in Coral Gables, Fla.—in March 2020. The 222,541-square-foot Building 2 is being erected at 3011 Ponce de Leon Blvd. The site will also include a 242-key hotel and a shared parking podium. Completion is scheduled for the third quarter of 2022.

PNC Bank provided a $100 million loan that included Building 1 of the development—also on our list. The 2.1 million-square-foot, $500 million complex is recognized as the largest development in the city’s history since its inception in the early 1900s. 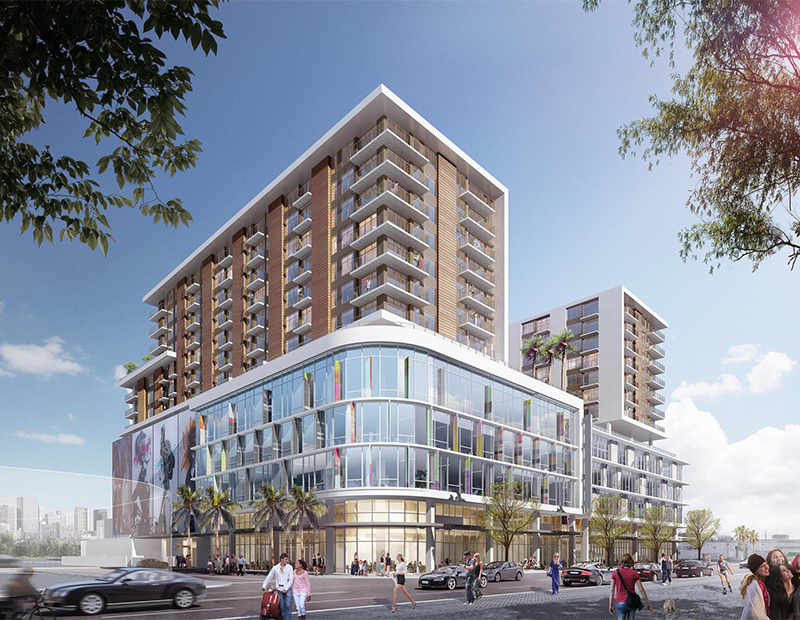 A joint venture between CIM Group and One Real Estate Investment is developing Wynwood Square, a 285,510–square-foot mixed-use project at 2201 N. Miami Ave., also in the Wynwood district. Sumitomo Mitsui Banking Corporation provided a $71.5 million construction loan. Upon completion, expected in the second quarter of 2021, the project will include first-floor retail, four levels of parking space and 257 residential units. 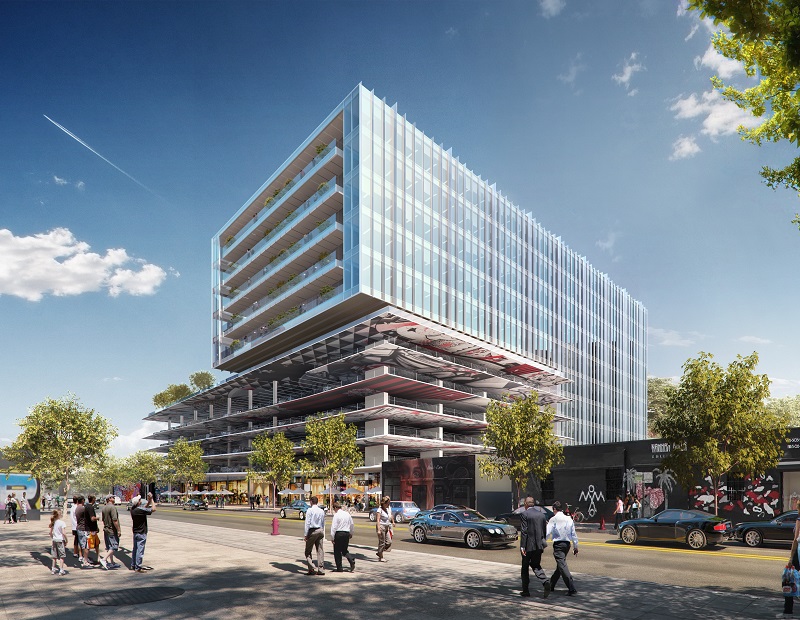 Chicago-based Sterling Bay entered the Miami market with 545wyn, a creative mixed-use project. Development of the 324,935-square-foot, 10-story asset commenced in January 2019, with Bank OZK originating $81 million in construction financing in late 2018. At full build-out, expected in the third quarter of this year, 545wyn will include first-floor retail and four levels of parking space. Architecture firm Gensler has signed up as the building’s first tenant, with plans to occupy 13,500 square feet of office space. 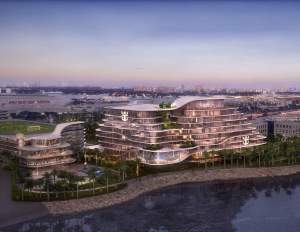 The 350,000-square-foot Royal Caribbean Headquarters is being constructed in downtown Miami, taking shape on 96 acres at the junction of NEC North American Way and Caribbean Way. The $300 million HOK-designed project was initially expected to come online in December 2020. However, Royal Caribbean paused construction due to coronavirus-induced concerns shortly after announcing the layoffs of 26 percent of its workforce. 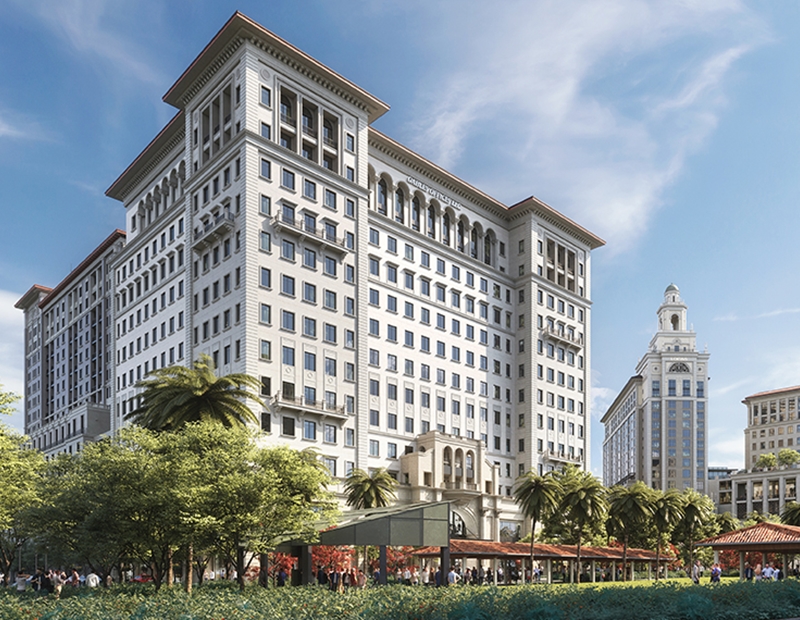 Also developed by Agave Holdings, the 392,568-square-foot project is the largest office tower within the upcoming Plaza Coral Gables mixed-use development. Upon completion, scheduled for August 2022, the asset will include two floors of entertainment and lifestyle retail space, as well as 135 residential units. Last July, BAC Florida Bank signed a 63,000-square-foot lease agreement for space at Building 1. The company will relocate its headquarters from the nearby 169 Miracle Mile. 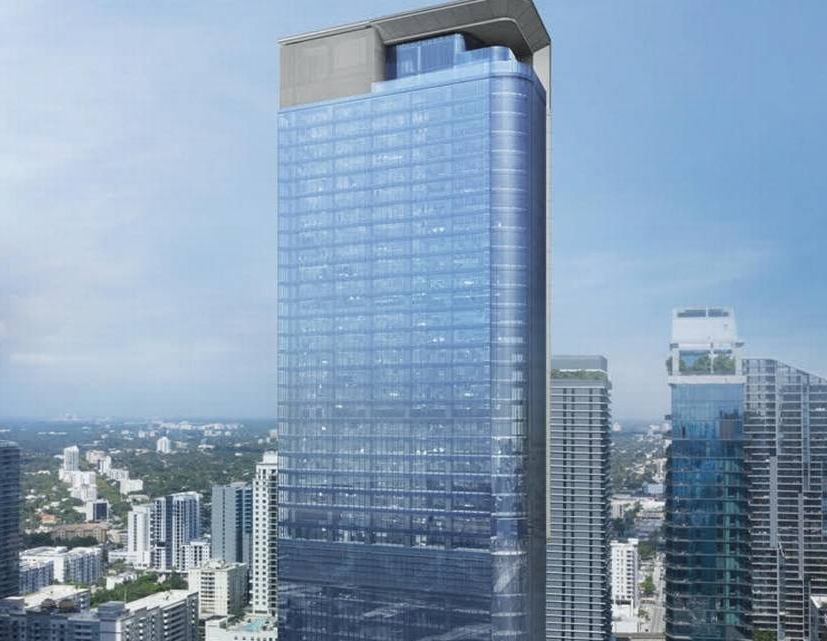 The largest upcoming office delivery on our list is 830 Brickell Plaza, a 505,031-square-foot project developed by OKO Group and Cain International in Miami’s Brickell submarket. Construction on the 57-story tower started in February 2019, with completion scheduled for the end of 2021. Last August, MSD Capital provided a $300 million construction loan for the project.

Rising 734 feet, 830 Brickell Plaza will be the second-tallest office building in Miami, as well as the submarket’s first Class A office project in the last decade. Upon completion, the tower, designed by Adrian Smith + Gordon Gill Architecture, will include an eight-story parking garage, which will double as the tower’s podium. WeWork has already signed a 147,000-square-foot lease at the property.

An earlier draft of this article stated that the developer of River Landing was Hellinger Penabed Cos., as opposed to Urban-X and its office component as totaling 480,000 square feet instead of 135,000. The ranking has been amended as a result.