Jonna Group at Colliers International has been selected to exclusively represent the sale of the trophy Montgomery Luxury Lofts in Ann Arbor, Michigan. The mixed-use offering is a rare generational asset in the heart of downtown Ann Arbor, home to the prestigious University of Michigan. The property was custom built in 2021 and consists of 41 luxury residential units as well as three retail suites with frontage on 4th Avenue. The property includes a rooftop patio as well as bicycle storage and a basement level housing the famous Ann Arbor Comedy Showcase established in 1984.

The subject property is situated on 4th Avenue and Liberty Street in the downtown core of Ann Arbor. The property features excellent and affluent demographics of over 161,000 people within a five-mile radius and an average household income of over $108,000 in a one-mile radius. Montgomery Luxury Lofts is located in a premier walkable downtown district that includes several restaurants, bars, attractions and more. Ann Arbor is consistently ranked as one of Michigan’s most walkable cities in the state. The subject site is just a 10-minute walk to the University of Michigan which is home to nearly 50,000 students. The university is consistently ranked the #1 Public University in the United States with several yearly accolades. The site is just 1.2 miles from Michigan Stadium and 1.5 miles to University of Michigan Hospital.

Ann Arbor is the fifth-largest city in Michigan and is home to the University of Michigan. The university significantly shapes Ann Arbor's economy as it employs about 30,000 workers, including about 12,000 in the medical center. The city's economy is also centered on high technology, with several companies drawn to the area by the university's research and development infrastructure. The city is also home to a secondary office of Google's AdWords program—the company's primary revenue stream. Ann Arbor is home to Michigan Medicine, the #1 ranked Best Hospital in the State of Michigan by several publications. Ann Arbor is home to “The Big House”, the largest stadium in North America with average attendance of 111,000 per Michigan football game. Several employers are drawn to the area by the university's research and development money, and by its graduates. High tech, health services and biotechnology are other major components of the city's economy; numerous medical offices, laboratories, and associated companies are in the city. 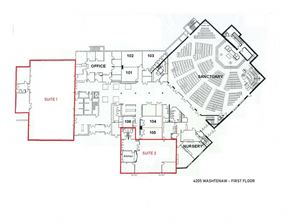