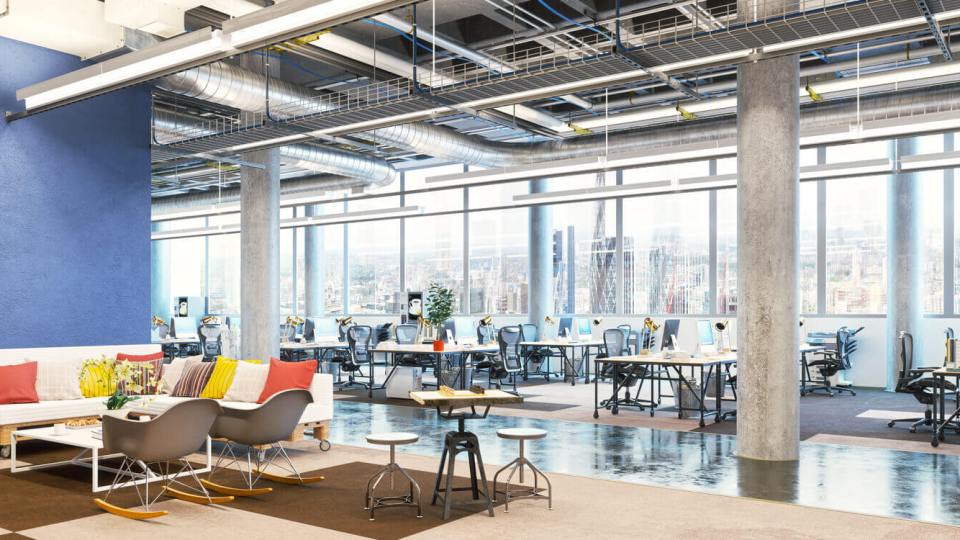 Adaptive reuse — converting buildings that were once used for one purpose into other uses — has been a popular investment for decades. And, as the American economy shifted from manufacturing to services, the need for more office space exploded. Add in the emergent trends of large, open and creative spaces and it’s no wonder that old industrial buildings have been a go-to for adaptive reuse projects. In fact, of all office building adaptive reuse projects in the last century, 61% were converted from industrial space. The second-most converted was retail at 19%.

Adaptive reuse isn’t new, even for office real estate. But it really didn’t take off until the 1980s. The Industrial Revolution set the stage for large manufacturers that grew even larger with the expansion of railroad networks across the country. Steel and shipbuilding became even bigger business. Meanwhile, technological advancements in radio and electronics — in combination with the consumer-centric boom that occurred after World War II — added gasoline to the industrial fire throughout the nation.

Of all the conversions to office space in the last 100 years, only 3% took place in the first five decades of the 20th century. The 1960s brought with it slightly more adaptive reuses — accounting for 2% of the total — while 5% of them took place in the 70s.

A commercial construction boom coincided with outsourcing and offshoring, which began to draw manufacturing and assembly to other countries. As a result, the need for manufacturing facilities in the United States began to decline and, by the 1980s, the decline was unmistakable. One-fifth of all office conversions in the last century were in the 80’s, representing nearly 68 million square feet across 635 buildings.

In fact, 90% of all buildings that have been converted to office buildings were only completed in the last 40 years. Now, not only can industrial buildings be retrofitted into offices rather quickly, but many are also near important amenities for workers, such as major traffic corridors near the city. They can also be less expensive to acquire, as well.

What’s more, the converted warehouse office building trend only hastened further with the advent of creative and coworking spaces. Not only was it more economical to convert a vacant building, but now, it was cool, too.

Not surprisingly, the more dense, historic and industrial a state is, the larger the number of conversions. The northeastern and rust belt states dominate the top of this list, accounting for nearly half of all conversions since 1920. In particular, New York, Massachusetts, Pennsylvania, Illinois, Michigan and Ohio collectively converted 1,572 buildings into office space — 37% of the total conversions.

Add conversions in California and Texas and two-thirds of all office adaptive reuses in the last 100 years were in just 15 states — New England and the rust belt states, plus California and Texas. Historically, these states were centers for industry and manufacturing — more so than the other 35 states — and they also had another important quality: density.

Portland, Milwaukee & Minneapolis Among Most Popular Cities for Adaptive Reuses

New York City, Los Angeles, Boston, San Francisco and Chicago have all had more than 100 buildings converted for office use in the last 100 years, representing more than 106 million square feet. 27.5% of all converted buildings — more than one-quarter of all conversions in the country — occurred in these five cities. Office space in New York City alone grew 49.6 million square feet — two and a half times that of Boston and five times that of Los Angeles. The Bay Area’s commercial real estate market also added some 126 projects — totaling roughly 10.8 million square feet of San Francisco office space.

Clearly, the dense, industrial cities of the 20th century also had the ingredients for a booming office market, as well, as services began to emerge as the dominant force in the U.S. economy. Second- and third-tier cities were also well-positioned for office adaptive reuse.

The Minneapolis office market was shaped through its history as the flour and timber milling capital of the world in the 19th century. It was also the only major business hub between Chicago and Seattle, therefore attracting workers across industries that supported the staples. The banking industry also exploded here as millers paid cash for grain that had to be held until it was ready for milling and, therefore, needed a place to put it. Since then, Minneapolis-St. Paul has converted nearly 11 million square feet of existing space into offices across 92 buildings.

Likewise, Portland’s shipbuilding industry during World War II not only attracted 150,000 people in the 1940s and 1950s, but also laid the groundwork for numerous industrial conversions to take place in the densest city in Oregon and one of the most progressive cities in the country. To date, the city has converted 83 buildings to offices — more than 6.6 million square feet for the Portland office market.

Further east in Milwaukee — a hub for German and Eastern European immigrants in the 19th century — the city’s industrial past is deeply rooted in manufacturing, bulk storage and brewing. However, while breweries have remained, and even expanded, the other industries have declined since booming in the early 1900s, thereby making way for more service-based companies. Office space in Milwaukee has grown by 79 buildings — totaling more than 7.8 million square feet — thanks to adaptive reuse.

Adaptive reuse refers to the conversion of an existing building to a different use than what it was originally built for. The study is exclusively based on office data related to buildings containing 25,000 square feet or more.

It’s possible for a building to be converted more than once. For this reason, we only considered buildings that were converted to office use and have remained as such to this day.

New York City contains office data for all boroughs except the Bronx and State Island.