The property is located at the northwest corner of West Huron and North Orleans Street within the near north side of Chicago in the affluent River North neighborhood. The property is part of a thriving community that will experience a 6.16% population growth projection over the next five years and has a median household income of $95,867 within a one-mile radius. The building is situated on an entire city block between West Erie Street and West Huron Street (east/west thoroughfares) and between North Orleans Street and North Franklin Street (north/south thoroughfares). With this location, the property finds itself in one of Chicago’s most densely populated neighborhoods (132,683 residents within a one-mile radius) with excellent public transit options. For example, the storefront is steps from the Chicago/Franklin “L” station (brown and purple lines) and is just west of the Chicago and Grand “L” stations (red line). Additionally, the Brown Line has an average weekday ridership of 68,073 while the purple line has an average weekday ridership of 10,413, thus providing commuters direct access to public transportation. It is worth noting that the properties are surrounded by several tech companies that help drive a daytime employee population of approximately 453,000 residents. Some of those companies include Groupon (HQ) Yelp, Spotify, Salesforce, Motorola, Braintree, GoHealth, 1871, and eBay, among others. Another feature of this location is the convenient access to the Kennedy Expressway (Interstate-90 and Interstate-94). Located just two blocks south is the Ontario Street and Ohio Street exit/entrance ramps. The nearby location of the feeder ramps allows vehicular commuters and delivery vehicles a direct route to and from the asset. The properties are surrounded by an abundance of national and local retailers and is within walking distance to North Michigan Avenue, Chicago’s top shopping destination. Neighboring Retailers include: Whole Foods, Walgreens, Orange Theory, CorePower Yoga, Starbucks, McDonald’s, Potbelly, Chick-Fil-A, Dunkin Donuts, Peet’s Coffee, Limitless Coffee, UFC Gym, River North CrossFit, Supercuts, Portillo’s, and Chase Bank among many others.
read more read less

How many active listings are there at 325 West Huron?

At present, there is 1 space listed at 325 West Huron.

What is the total square footage of 325 West Huron?

What year was 325 West Huron built and finished? 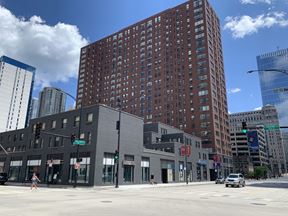